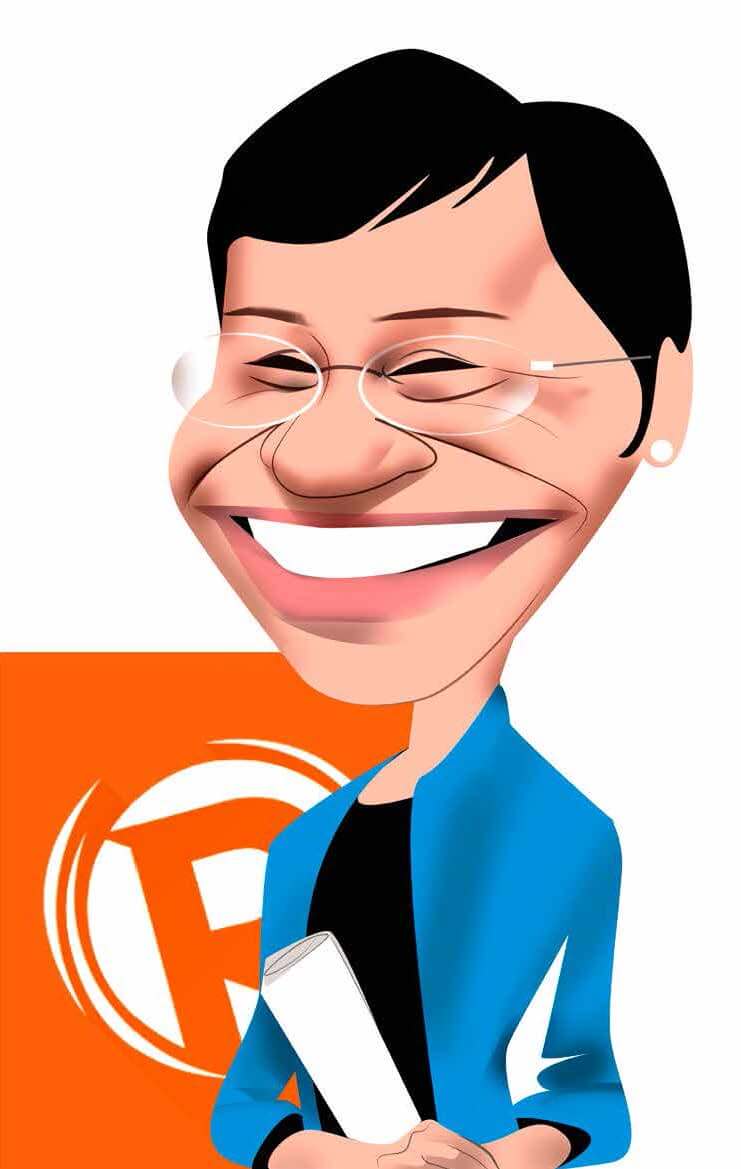 By Maria Ressa,
CEO and Executive Editor,
Rappler, The Philippines

The first time I heard that was more than two decades ago, looking at the virulent ideology that powered al-Qaeda. That was what the terrorists used to justify their attacks. Then at a pivotal moment, when I was still just learning to deal with the new weapon against journalists, media researcher Julie Posetti convinced me that I should be speaking about the attacks that I was experiencing on social media, and she interviewed me for an article in a UNESCO publication: An Attack on One is an Attack on All.

We are at an existential moment in time -where, if we don’t take the right steps forward, democracy as we know it is dead. When journalists are under attack, democracy is under attack. Social media platforms are now the world’s largest distributor of news, but, while they’ve taken the revenues, they’ve ignored the gatekeeping powers that news groups have traditionally had.

It takes courage to fight back against the insidious manipulation these platforms have enabled. They’re now used as a weapon against journalists, in a place where lies laced with anger and hate spread faster than facts. (Facts are kinda boring.)

This reality hit me in December 2018 when Time Magazine named me one of the guardians of truth. At that point in time, I realized that -among the Capital Gazette (the journalists who were killed there), the Reuters journalists still in prison in Myanmar at the time and Jamal Khashoggi, I was the only one who was both alive and free. It made me think that never before has our profession – protecting our democracies – demanded so much from us.

The battle for truth is the battle of our generation. With technology as the accelerant, a lie told a million times becomes a fact. Without facts, we don’t have truth. Without truth, there is no trust. Without all three, you can’t have democracy. This is why democracy is broken around the world.

In our country, the bottom up exponential attacks on social media – astroturfing and creating a bandwagon effect – softened the ground before the same lies came top down from our top government officials.

I know this first hand: in 14 months, the Philippine government filed at least 11 cases and investigations against me and Rappler. I was arrested twice in a 5-week period, and I’ve posted bail 8 times in about 3 months. I have committed no crime except to be a journalist and to hold power to account.

I’ve seen social media and our legal system weaponized against those who ask questions, who stand up for values, who demand the rights guaranteed under our Constitution, which is patterned after the US Constitution.

When I was first arrested early last year, the officer said, “Ma’am, trabaho lang po.” (Ma’am, I’m only doing my job). Then he lowered his voice to almost a whisper as he read me my Miranda rights. He was clearly uncomfortable, and I almost felt sorry for him. Except he was arresting me – the last act in a chain of events meant to intimidate and harass me -because I’m a journalist.

This officer was a tool of power – and an example of how a good man can turn evil – and how great atrocities happen. Hannah Arendt wrote about the banality’ of evil when describing men who carried out the orders of Hitler in Nazi Germany, how career-oriented bureaucrats can act without conscience because they justify that they’re only following orders.

“I want to thank all the news organisations around the world who help us shine the light. Please, let us do the same for every journalist under attack in every’ part of the world. Remember: an attack on one is an attack on all.”

So what about American social media platforms? I am both a partner and a critic of Facebook. Rappler is one of Facebook’s two Filipino fact-checking partners.

Facebook is essentially the internet in the Philippines. We are the canary in the coal mine because globally, Filipinos spend the most time online (more than 10 hours a day) and on social media (we have been the top users around the world for four years in a row). But we are also democracy’s dystopian future.

Last year I was with Cambridge Analytica whistleblower Christopher Wylie, and he told me that the Philippines “creates an ideal petri dish where you can experiment on tactics and techniques that you wouldn’t be able to as easily in the West..and if it doesn’t work, it doesn’t matter, you won’t get caught. And if it does work, then you can then figure out how to port that to the West.”

I asked him if the Philippines paved the way for Brexit and Donald Trump. You know what he said? He sidestepped a little, but I’ll read his entire quote so stay with me:

Filipino politics kinda looks a lot like the United States. You’ve got a president who was Trump before Trump was Trump, and you have relationships with people close to him with SCL and Cambridge Analytica. And you had a lot of data being collected – the 2nd largest amount of data after the United States collected in the Philippines.

This young man behind the psychological operations web of Steve Bannon backed by Robert and Rebekah Mercer added that “colonialism never died, it just moved online.”

This nightmare began for me more than 3 years ago. Rappler wrote the first pieces about it globally in 2016. I wrote 2 of the 3 parts of our first series and was rewarded with an average of 90 hate messages per hour.

If nothing changes, what’s happened to us is going to happen to you. It’s already happening now. Underlying it all is greed and fear, in our case the violence a brutal drug war that the UN says has killed at least 27,000 people, far more than the official number of 5,500.

People are afraid to stand up for what is right because there are costs: Rappler in the Philippines is a cautionary tale – and one of my arresting officers said it best when he was trying to silence our young reporter who was livestreaming. He said: “Be quiet, or you’re next.”

This micro-targeting online ad-driven business model structurally undermines human will. Our personal experiences are sucked into a database, organised by AI, then sold to the highest bidder. It is – as it has always been – about power and money. That has also siphoned money away from newsgroups, and if nothing is done, this represents a foundational threat to markets, election integrity, and democracy itself.

These social media platforms are behavioral modification systems we voluntarily enter. We are Pavlov’s dogs, and to quote Wylie as well as Blackberry co-founder Jim Balsillie: data at this interpersonal level is NOT the new oil: it is plutonium. And we need to treat it with all the care that plutonium requires. An atom bomb has already exploded, and we all don’t know about it. Until we accept that, we can’t solve the problem.

So what can we do?

First, journalists need to collaborate. Throw out your old definitions: this is a new world. Collaborating isn’t easy’ because we were unable to compete against each other. In the Philippines, our data tells us that news groups have been pushed to the periphery of our information ecosystem, and in the centre are disinformation networks, some linked to Russia, some to China. They are all actively’ sharing amongst each other, while we are not. This is how alternative realities bloom.

We have to stop taking the bait of emotions, and seek what we have in common over what drives us apart, because that’s the way the bad guys are working: they take a fracture line in our societies and pound it open to separate us into us vs them.

And it’s not just the journalists: let’s bring in academia, tech, and civil society, to unite the truth-tellers and join forces to protect the facts. We have to fight now while we’re strong, because, as we have learned, you only get weaker over time as this virus of lies saps civic engagement. If you have no facts, civil society becomes apathetic, and the voice with the loudest megaphone wins.

Second, we need to demand enlightened self-interest from tech companies because, in the long term, yes, the solution is education; medium term: media literacy. But in the here and now? It’s only the tech platforms that can do something meaningful.

Third, we need to create a global database of disinformation networks, and a global interpol that stops the impunity that nations and companies are getting away with today. Remember after the Holocaust and WWII, the world came together to try’ to stop the worst of human behaviors. That was when we got Bretton Woods, NATO, the UN Declaration of Human Rights. What are the values that govern the internet? How do we punish offenders?

Power – and bullies – will never stop if you give in to them. We at Rappler live this every day. Political bullies who threaten and abuse journalists are never happy until they get complete capitulation. Our battle is your battle.

We can protect the rights guaranteed by our democracies, or watch them slowly erode in plain sight. This is the challenge for all of us today: what can we put in place today to protect our tomorrows?

I want to thank all the news organisations around the world who help us shine the light. Please, let us do the same for every journalist under attack in every part of the world. Remember: an attack on one is an attack on all. #

This piece is based on Maria Ressa’s keynote speech at the UN Global Investigative Journalism Conference in Hamburg, Germany, September 2019.