Can A Greek ProPublica Save The Nation? 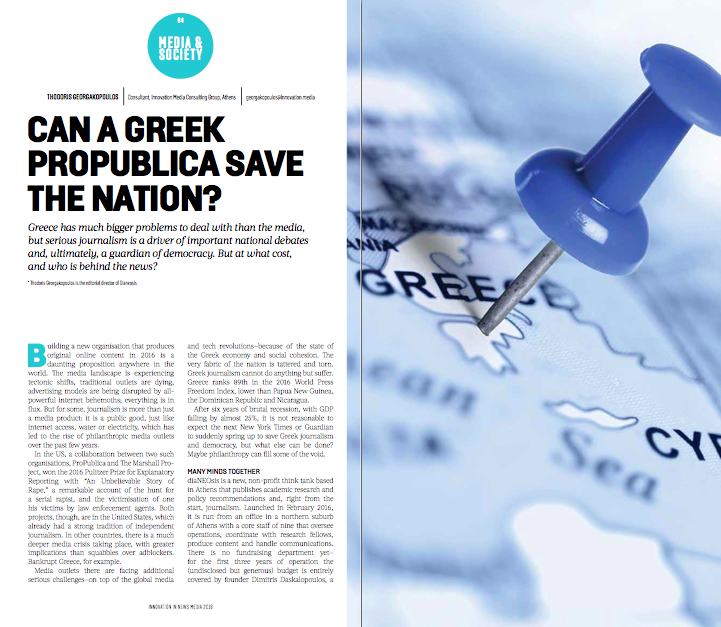 19 Dec Can A Greek ProPublica Save The Nation?

Greece has much bigger problems to deal with than the media, but serious journalism is a driver of important national debates and, ultimately, a guardian of democracy. But at what cost, and who is behind the news?

Building a new organisation that produces original online content in 2016 is a daunting proposition anywhere in the world. The media landscape is experiencing tectonic shifts, traditional outlets are dying, advertising models are being disrupted by all- powerful internet behemoths; everything is in flux. But for some, journalism is more than just a media product: it is a public good, just like internet access, water or electricity, which has led to the rise of philanthropic media outlets over the past few years.

In the US, a collaboration between two such organisations, ProPublica and The Marshall Pro- ject, won the 2016 Pulitzer Prize for Explanatory Reporting with “An Unbelievable Story of Rape,” a remarkable account of the hunt for a serial rapist, and the victimisation of one his victims by law enforcement agents. Both projects, though, are in the United States, which already had a strong tradition of independent journalism. In other countries, there is a much deeper media crisis taking place, with greater implications than squabbles over adblockers. Bankrupt Greece, for example.

Media outlets there are facing additional serious challenges—on top of the global media
and tech revolutions—because of the state of the Greek economy and social cohesion. The very fabric of the nation is tattered and torn. Greek journalism cannot do anything but suffer. Greece ranks 89th in the 2016 World Press Freedom Index, lower than Papua New Guinea, the Dominican Republic and Nicaragua.

After six years of brutal recession, with GDP falling by almost 25%, it is not reasonable to expect the next New York Times or Guardian to suddenly spring up to save Greek journalism and democracy, but what else can be done? Maybe philanthropy can fill some of the void.

diaNEOsis is a new, non-profit think tank based in Athens that publishes academic research and policy recommendations and, right from the start, journalism. Launched in February 2016, it is run from an office in a northern suburb of Athens with a core staff of nine that oversee operations, coordinate with research fellows, produce content and handle communications. There is no fundraising department yet— for the first three years of operation the (undisclosed but generous) budget is entirely covered by founder Dimitris Daskalopoulos, a former industrialist, Chairman of the Hellenic Federation of Enterprises and a well-known art collector.

There is a 9-member board of directors that oversees the think-tank’s operations, as well as a 30-member advisory board that provides feedback and additional assistance and backing. Both boards are comprised of prominent Greek professors, scientists, artists and entrepreneurs who peer review our studies, appear on TV to comment on our research and help us brainstorm new ideas, research subjects, concepts and strategy. The board members are not paid.

The goal of the organisation’s work is two-fold: it wants its policy recommendations embraced by decision makers in government, political parties and other institutions and turned into actual policy—like any traditional think tank—but it also aims to publish its findings, participate in public discourse and reach a much wider, mainstream audience. Which is where the journalism comes in.

In its first three months of existence, diaNEOsis has published an extensive nation- wide survey on Greek values, a smaller survey on the refugee crisis, an 8,000 word story on how billions of euros in EU cohesion funds were spent from 2007-2013, a technical review with 14 policy recommendations for the 2014-2020 funding period, an evaluation of the effect the financial crisis has had on the health of Greek citizens and the National Health System, and a proposal for a new production model for Greece, which will also be published as a book. 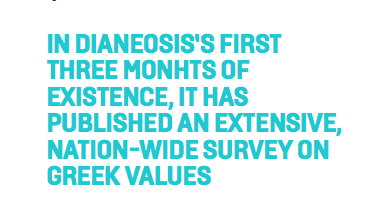 When we presented our findings to one government minister, we realised had loved the 8,000 word story but had not read any of the policy proposals that came out of our research. dioNEOsis is independent and without a stated ideological identity, although perhaps pro- European and mildly liberal. Staff and board members hold views from across the political spectrum.

Upcoming research includes studies on absolute poverty in Greece (and concrete measures to reduce it), a comprehensive plan for tax reform, a study on critical infrastructure security, a projection on the Greek demographic problem, and a study of social capital in Greece. Most of them will be surveys, academic papers or policy recommendation papers, or a combination of all three. The research is mostly done by ad-hoc teams of Greek and foreign research fellows who are experts in their respective fields. But in some cases, a more journalistic approach is preferred.

Everyone understands what poverty is, but hard data on the real situation in the country mid-crisis was lacking, so we asked one of Greece’s best economists to take a look with his team. They measured absolute poverty in Greece for the first time and proposed a specific policies to eradicate it, something journalists would have had difficulty doing.

When we decided to tackle the extremely complicated matter of the European Funding programmes and their impact on the Greek economy, we quickly realised the public is largely uninformed on crucial aspects of what has turned out to be the only serious influx of foreign investment into the country in recent years.

So instead of just ordering a technical review of the new 2014–2020 funding period with practical policy recommendations from experts, we also decided to do an 8,000 word piece of journalism that describes how those funds work, what has been done with them in the past, and the manner in which bureaucracy, corruption and incompetence has prevented them from being used in the best possible way. We even produced a 3-minute video animation explaining how those funds work and shared it on YouTube and on Facebook. More original stories are in development, the next one will be a feature on the effect the lifting of restrictions had had on the cruise sector. It was expected to ignite the cruise industry in Greece and generate an additional €1.3 billion for the economy, but we discovered it had, in fact, had no effect on the industry whatsoever. So we investigated why.

All this content is published on dianeosis.org for free, along with any accompanying data. Policy recommendations and research findings are communicated to the relevant ministries, political parties and institutions, often in face- to-face working meetings with diaNEOsis staff. We do not work for others, but we do listen to what powerful people, who might be able to make a difference, would like to see us study. If the Education Ministry asked us to look at pre- school education, for example, we would decide if it was a worthwhile project and then publish it not just for the ministry but for everyone to see. Whilst none of our policy recommendations has so far been adopted—we have been publishing for just over three months—we hope to achieve meaningful impact within the first three years. 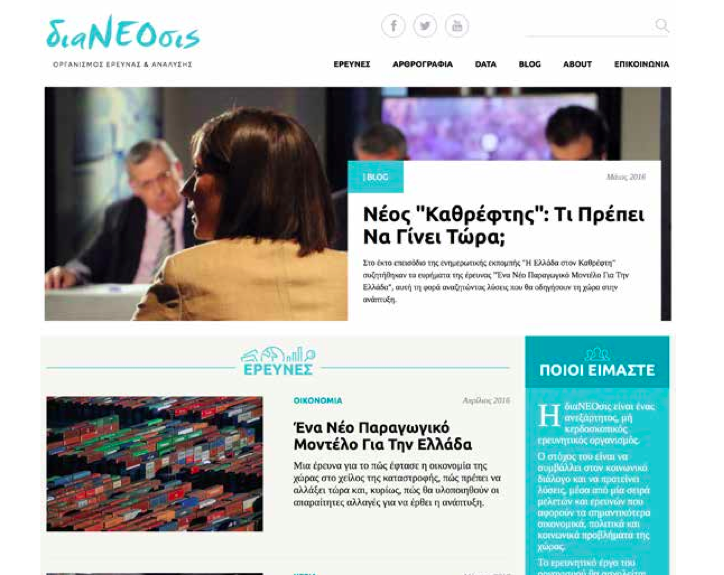 And Then, There’s Television

In addition to the website, social media, videos and presentations to decision makers, diaNEOsis produces an original bi-weekly two- hour television show on a national television network that presents the results of its main research projects to an even wider audience. The latest two-part episode analysed the reasons for Greece’s economic collapse, the progress that has been made over the past six years, and discussed a new production model for the country, as proposed by diaNEOsis’s latest study, starting a useful conversation.

On the show, the principal research fellows commented on the issues while prominent current and former politicians, entrepreneurs and academics provided their insights on the issue, free of charge. In total, ten episodes are scheduled to be broadcast until July 2016. All episodes are, of course, available for free on YouTube and on the diaNEOsis website.

INNOVATION’S TAKE:
Questions remain about the long-term motivations of wealthy philanthropists who decide to back not- for-profit media projects, but if properly organised, staffed, funded and led, they can indeed produce journalism worthy of the name, and perhaps reach decision makers in a way that could influence the fate of a nation or, at the very least, focus its attention on a country’s deeper problems.