Can Newspapers Do Branding Better? They Must 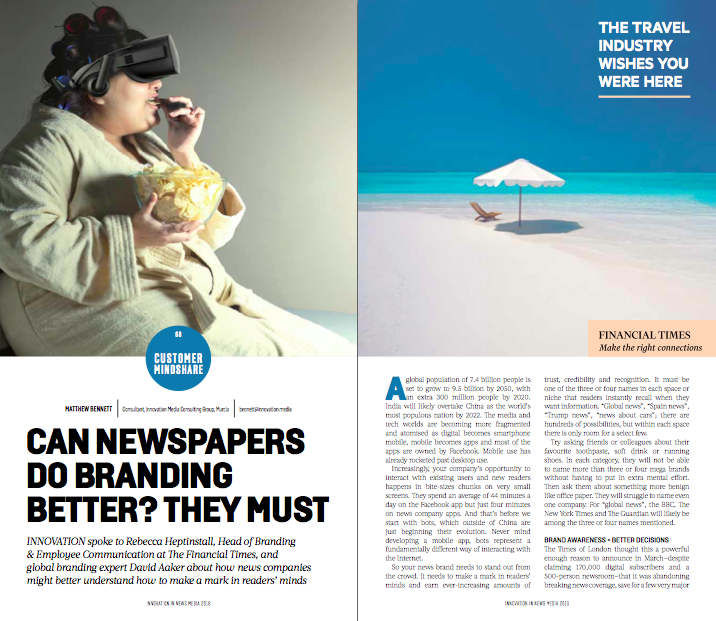 23 Dec Can Newspapers Do Branding Better? They Must

INNOVATION spoke to Rebecca Heptinstall, Head of Branding & Employee Communication at The Financial Times, and global branding expert David Aaker about how news companies might better understand how to make a mark in readers’ minds.

A global population of 7.4 billion people is set to grow to 9.5 billion by 2050, with an extra 300 million people by 2020. India will likely overtake China as the world’s most populous nation by 2022. The media and tech worlds are becoming more fragmented and atomized as digital becomes smartphone mobile, mobile becomes apps and most of the apps are owned by Facebook. Mobile use has already rocketed past desktop use.

Increasingly, your company’s opportunity to interact with existing users and new readers happens in bite-sizes chunks on very small screens. They spend an average of 44 minutes a day on the Facebook app but just four minutes on news company apps. And that’s before we start with bots, which outside of China are just beginning their evolution. Never mind developing a mobile app, bots represent a fundamentally different way of interacting with the Internet.

So your news brand needs to stand out from the crowd. It needs to make a mark in readers’ minds and earn ever-increasing amounts of trust, credibility and recognition. It must be one of the three or four names in each space of niche that readers instantly recall when they want information. “Global news”, “Spain news”, Trump news”, “news about cars”; there are hundreds of possibilities, but within each space there is only room for a select few.

Try asking friends or colleagues about their favourite toothpaste, soft drink or running shoes. In each category, they will not be able to name more than three or four mega brands without having to put in extra mental effort. Then ask them about something more benign like office paper. They will struggle to name even one company. For “global news”, the BBC, The New York Times and The Guardian will likely be among the three or four names mentioned.

The Times of London thought this a powerful enough reason to announce in March—despite claiming 170,000 digital subscribers and a 500-person newsroom—that it was abandoning breaking news coverage, save for a few very major stories like the terror attacks in Paris or Brussels. Why? Because the BBC owned that niche. The Times surveyed its readers but “they also didn’t think of us as a brand that provided up to the minute breaking news…their instinct was to go somewhere like the BBC”, the paper’s Deputy Head of Digital, Nick Petrie, told INNOVATION.

Kotler and Armstrong’s now classic definition of a brand is “a name, term, sign, symbol, or design, or a combination of these, that identifies the maker or seller of a product or service”. Their book, Principles of Marketing, is in its sixteenth edition. Kotler—now the S. C. Johnson Distinguished Professor of International Market- ing at the Kellogg School of Management— outlined a more developed six-point framework in The Marketing Journal in March.

A brand must strive to have purpose, positioning, differentiation, identity, trust and beneficence, he wrote. The company must know what it is doing, which position it occupies in the market, how it is different from its competitors, what its values are, if it can deliver on its promise to customers in a trustworthy manner, and whether or not the existence of a brand and its activity contributes something towards some higher benefit for its customers and society, beyond its immediate purpose.

“This conceptual model is very relevant for marketing in this age of growing digital and social media”, he said: “We live in the era of consumer empowerment led by abundant information and networked communities”.

“Newspaper brands that are going to be successful need to have some unique advantage”, said David Aaker, author of Aaker on Branding: 20 Principles That Drive Success: “One thing they can do is to have a branded columnist, the New York Times has people like Krugman and others, including some sports columnist, that get people to read their newspaper because they can’t get it any other place. They can also have branded sections, like the Sunday Book Review”.

And the key element of a news brand? The news, of course, which some projects somehow appear to forget. “I think it depends on the newspaper, but the central purpose is probably to provide current information”, said Aaker.

The FT’s new campaign takes this central concept to a whole new level, with editorial and marketing staff working together to uncover and identify real, very complex stories that are then used as the focal point for the branding actions and ad campaigns. 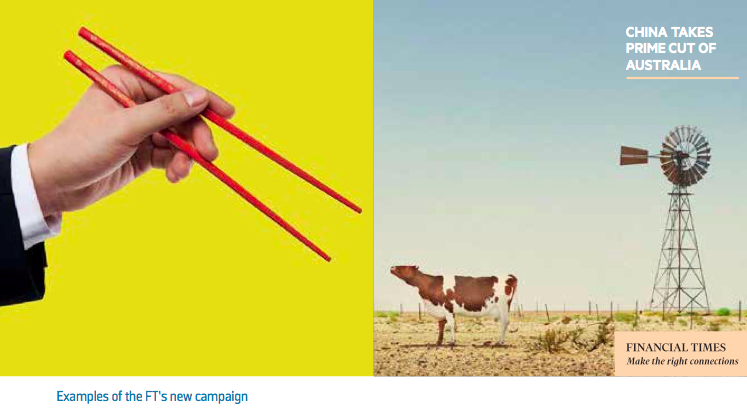 “It’s the first time we’ve really put journalism at the centre of our marketing, which sounds a bit mad seen as we’re a 128-year old brand”, explained the FT’s Head of Branding & Employee, Rebecca Haptinstall.

The branding and marketing teams ask the paper’s expert journalists to explain the intricacies of the story to them—including one about how the Chinese property market is linked to Bordeaux wine sales—before any creative work is done, so they can unearth the most surprising aspect of it before developing the visuals and copy.

The result, said Haptinstall, is that even the journalists are proud of the way the FT is now being marketed to new readers: “Yes, that was a big win for us, and it’s because we involved people. We wanted to do marketing that didn’t look like marketing”. The additional value of authority, which good reporters have as a result of their hard work, understanding of the issues and industry contacts, should not be underestimated, Aaker agreed: “The reputation of being a journalist and having a readership base will really help you”.

He said differentiation was a problem for news outlets as information becomes more commoditised. Columnists with strong personal brands or sub-brand magazines or supplements are two solutions. An editor with a strong personality and a liking for the media spotlight is another.

Kotler praised Apple’s Steve Jobs, Virgin’s Richard Branson and Starbuck’s Howard Schultz in his March article as that kind of leader, “But that’s very rare”, explained Aaker: “If you can get a talent like Steve Jobs or Schultz or Branson, you should do it; otherwise, it probably has no effect, usually the people who run a brand are invisible”. The FT created a new sub-brand last year after receiving feedback from the newsroom about how the speed of news and analysis was quickening. They called it Fast FT. 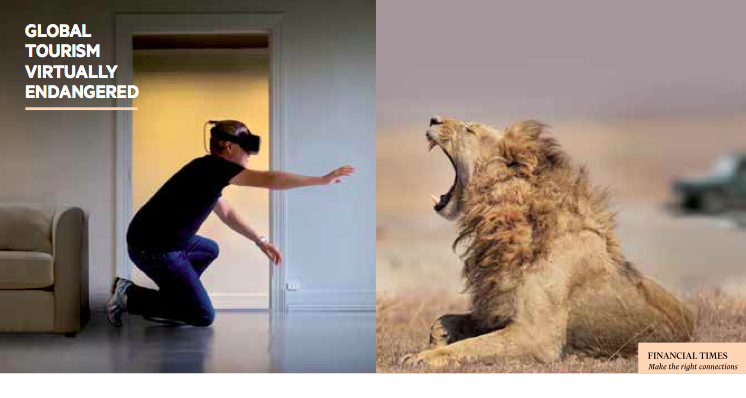 What It All Comes Down To

At the bottom of it, all three agree, is trust in a quality product. “A brand needs brand trust so that customers will believe that the brand will deliver what it claims”, wrote Kotler: “Apple customers trust that their Apple phones and Apple watches will deliver what the company claims”.

Asked if it was possible for a broken media brand to win reader trust back, Aaker replied that it would be difficult, because of trust and quality issues: “First of all you have to get the product right, that the product is right, before you even have a chance, and that’s not going to be enough usually, so you have to have some branded innovation, you’re not going to be able to do just the same as before, it’s a very tough job. They need energy, and some reason for people to come back”.

The FT’s Heptinstall is very clear about the importance of the paper’s solid, reliable reporting and analysis: “I think for us our brand is a promise. Accurate independent journalism that people can trust. People that read make business decisions on what they read, so it’s so important that we have that trust”.

“We’ve stuck to our roots for 128 years. I think a lot of other media organisations have diversified. We know the whole world is not going to read the FT. We’re trying to appeal to people making business decisions on trusted content.”

“I think for us it’s about being modern, fresh, digital, while still holding on to our heritage; a lot of companies would kill to have that kind of reputation behind them and that reputation for world-class business journalism”, she added.

INNOVATION’S TAKE
Why do leading print and digital news brands get big rewards from investors? Your value is the value of your brand reputation and in journalism it has a name: credibility. If your brand has credibility, your company will attract loyal readers and advertisers. You do not increase your reputation with just better marketing communication but with better journalism done by independent newsrooms with only one owner: the public.