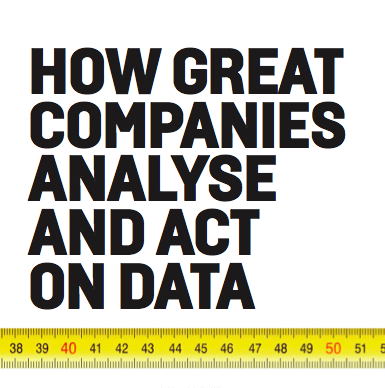 03 Sep How great companies analyse and act on data

Single metrics are no longer good enough, they don’t tell us enough about the link between news production and reader satisfaction. Working out which combined metrics are right for which model, though, is not easy.

Some news companies have increased their use of analytics, but not all have taken the leap. Different types of sites have different types of models and measure their success in different ways. “We have a tendency as editors and journalists to follow what’s known as single metrics, like page views, scroll depth, time on page”, says Jon Wilks, Chief Content Officer at Content Insights, a web analytics company headquartered in Bulgaria: “All of which are increasingly known to be misleading”.

Publishers find metrics difficult for several reasons. For those with advertising business models, it is difficult to measure the impact on sales, based on users who saw a digital ad. Proving a return on investment is hard.

Gathering data and acting on it, though, are two different things. Most publishers gather data, but not many know how to learn from it, and it needs to be tied to goals and key performance indicators. Different business models have different aims and indicators.

A page view, for example, records a technical occurrence: it doesn’t tell you anything about audience behaviour. Scroll depth tells you how far someone has moved down your page but it doesn’t tell you if they’ve stopped to look at it. “Then (publishers) looked at time spent on page”, Wilks adds: “but it’s the same thing. On its own, it just tells you that somebody opened a browser and left it open. They could have gone and made a cup of tea or something”.

So what do publishers need to measure? It depends on those goals.

Ad-based media outlets generate revenue from advertisers and marketers with different platforms and formats, offering content for free to consumers, and aiming to draw in high amounts of traffic. Subscription-based models which seek to generate revenue directly from the consumer, should focus exclusively on their relationship with those consumers.

Other news organisations might have a mix of revenue streams, and so need to measure a range of data related to different goals. Increasingly, the answer is to shift from single measurements like page views and clicks to a combination of metrics and the relationships between them.

At The New York Times, data scientists have found that a reader’s frequency, depth and breadth of engagement are the behaviours most likely to indicate future subscription behaviour. Shane Murray, VP of Data Analytics and Platforms, says it’s all about “active days on our web and app properties”.

“Depth, measured as the number of stories and screens viewed, reflects our goal to help readers get the most out of each visit to The Times, from breaking news and live event coverage, to in-depth, investigative reporting and visual journalism. Breadth, measured as the distinct number of topics read, reflects the range of news, opinion, feature and lifestyle coverage accessible to our readers via desktop and mobile home screens.”

Those measures correlated with an increased likelihood of subscribing. 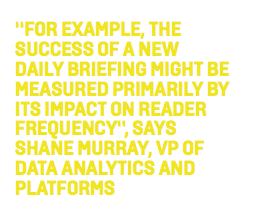 At Bloomberg, they focus on revenue: did they hit revenue goals by the end of the year? M. Scott Havens, global head of digital at Bloomberg, says the company tracks ARPU (average revenue per user), which measures how much money the organisation makes on each individual.

It tells them how much a user from Facebook is worth versus a user from Google search. “We certainly connect our audience insight with financial metrics”, Havens said: “Overall, our metrics tell us that our Bloomberg audience is engaged, educated, affluent and older”.

But they don’t just track one metric. “That would be shortsighted, because you want to build loyalty over time”, Havens says. He looks at audience insight and tracks behaviour and loyalty: “Are they signing up for a newsletter, are they downloading a podcast, did they register on the site?”.

“I’m looking at things like newsletter subscriptions, how many touch points, how many registrations.” Content Insights has an algorithm that measures and compares metrics across pages. “We’re noticing that something we call scored metrics is the best way to go”, Wilks explains: “which is where you take each of those single metrics, but you’re measuring them against each other and looking at the ratios between them to try to understand behaviour”.

“We look at 30 different metrics at any one time to see if that person scrolled, is there a suggestion they’re staying around that part of the page, looking at the word count on the page to see what the average amount of time it would take to read them, try to work out a sort of level of engagement that nobody’s really seen before.”

While ad-based news publishers need to be looking at reach and engagement, subscription companies should look for loyalty and interest, he says: “metrics that would suggest that, like time spent on page and the amount of time that a reader comes back regularly”.

At The New York Times, those measures are fed into the editorial process. “For example, the success of a new daily briefing might be measured primarily by its impact on reader frequency”, says Shane Murray, VP of Data Analytics and Platforms: “Additionally, on product and revenue initiatives we track outcomes such as new subscriptions and viewable ads, so that we can assess the direct revenue impact”.

The Reuters Institute 2016 report on analytics suggest that page views, clicks and uniques “serve as currencies” for advertising-based news organisations. There is a danger, however, in any race for reach and ever-increasing traffic.

“I think fundamentally, there needs to be a shift in how we work with advertisers”, Wilks adds: “The ad industry needs to use standardised metrics in a way to try to understand what they’re getting. Because the page click, the clickbait model does them no favours either, because all they’re paying for is high numbers of browsers being opened”.

Havens says there is less pressure to deliver media financial performance at Bloomberg Media because they’re not trying to eke out revenue gains, and there is a strong corporate culture of quality journalism. “From editor-in- chief John Micklethwait down, there is a belief and culture here of getting the story right and doing it without sensationalising it,” Havens said. “They’re writing first and foremost for professional investors, traders and bankers. Anybody trying to create clickbait, it’s not looked kindly upon.”

Some publishers are starting to look at attention metrics. Speaking to eMarketer, Keith Grossman, global chief revenue officer at Bloomberg Media, said, “We’re experimenting with all of the standard attention metrics, such as cost per minute or cost per hour”.

Understanding where audiences are spending their time on news sites is valuable insight. Without it, publishers aren’t able to interact with these people or join the conversation, or sell ads around topics their audience is passionate about.

Understanding behaviour will give publishers insight into how people consume content, and help publishers find new stories and new audiences.Ad-based and subscription-based news models need to understand their audiences and their different goals, and define and use metrics that make sense for them. Increasingly, this also means hiring great data and analytics talent, Bloomberg’s Havens says: “As far as translating analytics data for editors, it’s important to teach them why focusing on data matters […] and very helpful to have an analytics team or person that can simplify and breakdown the data”.

This article is one of many chapters published in our book, Innovations in News Media World Report 2017.