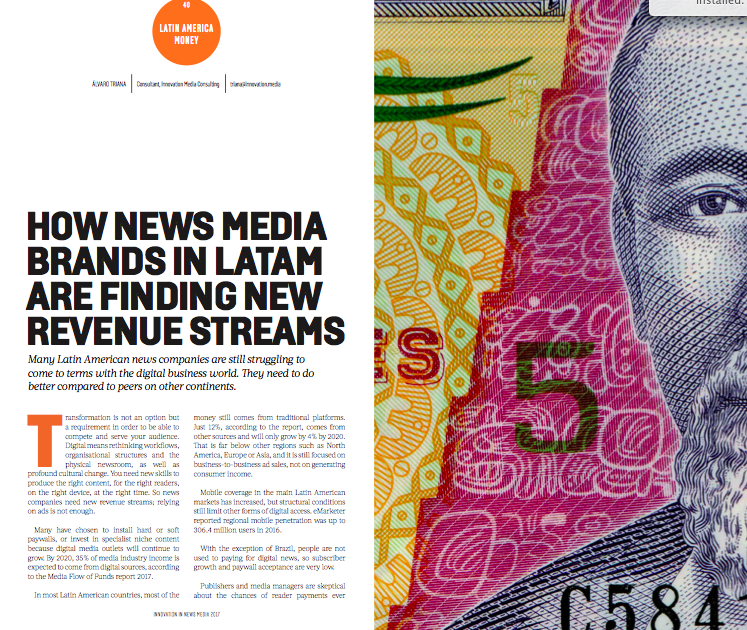 Many Latin American news companies are still struggling to come to terms with the digital business world. They need to do better compared to peers on other continents.

Transformation is not an option but a requirement in order to be able to compete and serve your audience. Digital means rethinking workflows, organisational structures and the physical newsroom, as well as profound cultural change. You need new skills to produce the right content, for the right readers, on the right device, at the right time. So news companies need new revenue streams; relying on ads is not enough.

Many have chosen to install hard or soft paywalls, or invest in specialist niche content because digital media outlets will continue to grow. By 2020, 35% of media industry income is expected to come from digital sources, according to the Media Flow of Funds report 2017.

In most Latin American countries, most of the money still comes from traditional platforms. Just 12%, according to the report, comes from other sources and will only grow by 4% by 2020. That is far below other regions such as North America, Europe or Asia, and it is still focused on business-to-business ad sales, not on generating consumer income.

Mobile coverage in the main Latin American markets has increased, but structural conditions still limit other forms of digital access. eMarketer reported regional mobile penetration was up to 306.4 million users in 2016. With the exception of Brazil, people are not used to paying for digital news, so subscriber growth and paywall acceptance are very low.

Publishers and media managers are skeptical about the chances of reader payments ever replacing advertising cash cows. No silver bullet has so far appeared to solve this problem. In fact, Latin America is still seeing growth in offline ads. “The paradigm of ad sales in traditional media outlets, where prices determine sales, versus fill rate at digital outlets, is still the norm in sales teams at companies”, says Guido Conterno, the executive director of the Grupo Diario de las Américas. El Nuevo Día, in Puerto Rico, is one of the few companies that have understood this properly. “On average, they have 60-70% of their web and mobile ad inventory full. There are no empty seats”, says Conterno.

Companies are migrating towards, or acquiring, new market intelligence tools that allow them to build and understand customer segments, in order to be able to offer them more personalised products that fit their habits.

Not many media companies in the region will be ready to take advantage of the spectacular 88% growth rate forecast for online income by the Media Flow of Funds report for 2020, unless they define their strategies, structures, processes and incentives.

Newsrooms resist the total transformation of their processes due to a lack of conviction, interest or a lack of leadership skills. Younger digital-native leaders, who are currently still learning, will shift that balance over time.

In that environment, however, there are some visionary companies in the region that have managed to redefine their business models with coherent digital strategies, allowing them to get ahead of the negative trend and hold on to their market leadership position.

Programmatic ads as a percentage of the whole is a growing trend, either individually or via consortiums with other media companies.“Programmatic in 2017 is forecast to reach up to 20% of digital income”, says Andrés Daniel Rojas, the executive manager of Digital Informativos, part of the El Tiempo group in Colombia: “and it will focus mostly on international sales”.

Mobile ads, mostly video, are also seen by company sales managers as an innovative way of adapting to the new platform. “Demand for video and native advertising, those are formats that have lots of potential in this country”, says Gervasio Márquez, sales manger at La Nación in Argentina: “Traditional display ads has just been through a bust. Mobile reached 8% of digital income in 2016”. 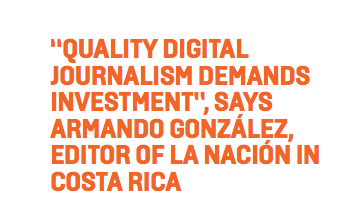 Branded content is still at an early stage but is gaining traction inside companies, via specialist teams tied either to marketing departments or digital marketing agencies. At El Comercio in Perú, it is developed in “close coordination with the newsroom”, says Ricardo Fortes, the paper’s sales manager. “The use of data with greater segmentation from a DMP offers enough targeted ads for advertisers”, says Márquez: “without having to increase the development of vertical products”.

“B2B is going to work on big data to do new projects and generate sales for advertisers”, adds Silvio Díaz, consumer knowledge manager at Infoglobo in Brazil: “by understanding the audience, you can offer a much more effective services to advertisers”.

Combining e-mail newsletters with audience segmentation and content marketing is how El Comercio, in Perú, drives ad revenues. “The use of distribution platforms like Facebook, or editorial content aggregators, are used more to push a brand than to monetise directly”, says Fortes.

Paid-news models are a very attractive option, even if they are not very common in South America. Brazil is the only country in the region where this really works at the moment, with one in five Brazilian city dwellers ready to pay for news content in 2016, according to the Reuters Institute Digital News Report.

Companies encourage digital subscriptions with hard or soft paywalls. Folha already has 150,000 online subscribers, via a flexible pay wall (the first five articles are free, and for the next five you need to be registered).

“We have about 30% of digital subscribers”, says Sidney Zamel, B2C manager at RBS, the leading media company in Río Grande do Sul: “and we’re growing by 50% in 2017. 53% of our digital income now comes from B2C. Our strategy is less and less about free local content”.

At Infoglobo, “we already have 45,000 digital subscribers and we hope to double that figure by the end of 2017, with new digital products and a more precise audience segmentation”, says Silvio Díaz. Companies are experimenting with freemium and some, like RBS in Brazil, charge for online access to their columnists. 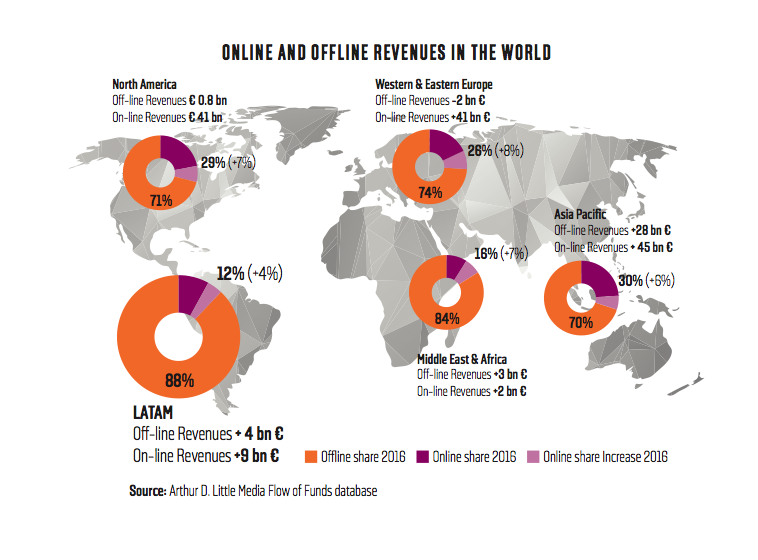 After analysing successful cases, INNOVATION recommends companies in the region adopt a digital strategy that fits their DNA and their audience.
A short, sharp transformation is preferable to a long, drawn out process. A one-time effort stops the newsroom and corporate teams from getting tired, or losing momentum and credibility.

The process must be re-inventive, not corrective. Both newsroom and commercial operations must be changed deeply to bring them into line with the new digital era. Work flows, resources, strategy, focus, talent mix, digital journalism and cultural change are all important.

Marketing and sales teams need to be reinforced to be able to broaden value proposals to better segmented audiences and advertisers.

Revenues must be reinvested in producing better quality journalism.
“Quality digital journalism demands investment”, says Armando González, editor of La Nación in Costa Rica: “and that means having enough revenue to pay for it, which is what the world’s leading publications have understood”.

“The aim is to win over a bigger and bigger audience, more targeted. Generating news and content at that density and volume is not cheap. There has been a very sharp fall in ad revenues. We must find digital consumers for our products”, says Ascanio Seleme, editorial manager at Infoglobo.

The direct relationship with readers, turning readers into loyal customers, is the most attractive option for all media companies in the region. The challenge is to design editorial products that are both powerful enough to encourage people to subscribe and interesting enough to provide value for advertisers and segmented audiences.