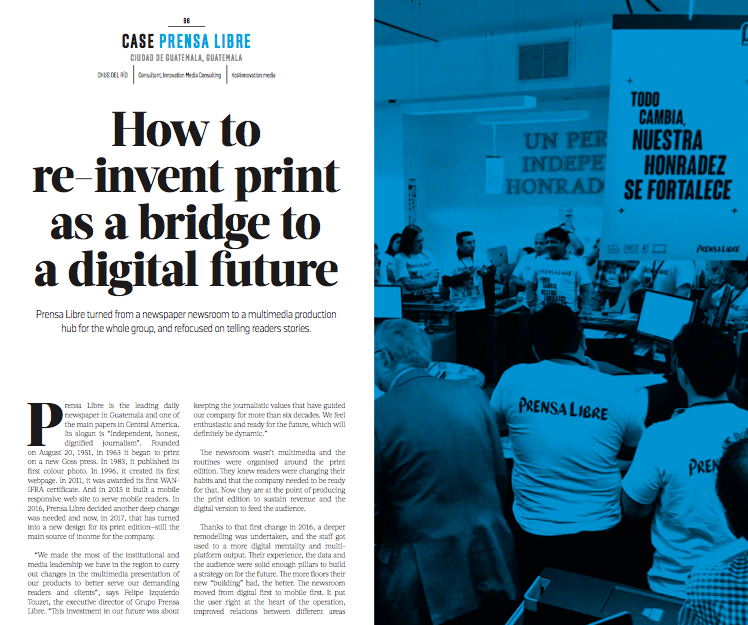 Prensa Libre turned from a newspaper newsroom to a multimedia production hub for the whole group, and refocused on telling readers stories. 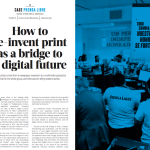 Prensa Libre is the leading daily newspaper in Guatemala and one of the main papers in Central America. Its slogan is “Independent, honest, dignified journalism”. Founded on August 20, 1951, in 1963 it began to print on a new Goss press. In 1983, it published its first colour photo. In 1996, it created its first webpage. In 2011, it was awarded its first WAN-IFRA certificate. And in 2015 it built a mobile responsive web site to serve mobile readers. In 2016, Prensa Libre decided another deep change was needed and now, in 2017, that has turned into a new design for its print edition—still the main source of income for the company.

“We made the most of the institutional and media leadership we have in the region to carry out changes in the multimedia presentation of our products to better serve our demanding readers and clients”, says Felipe Izquierdo Touzet, the executive director of Grupo Prensa Libre. “This investment in our future was about keeping the journalistic values that have guided our company for more than six decades. We feel enthusiastic and ready for the future, which will definitely be dynamic.”

The newsroom wasn’t multimedia and the routines were organised around the print edition. They knew readers were changing their habits and that the company needed to be ready for that. Now they are at the point of producing the print edition to sustain revenue and the digital version to feed the audience. 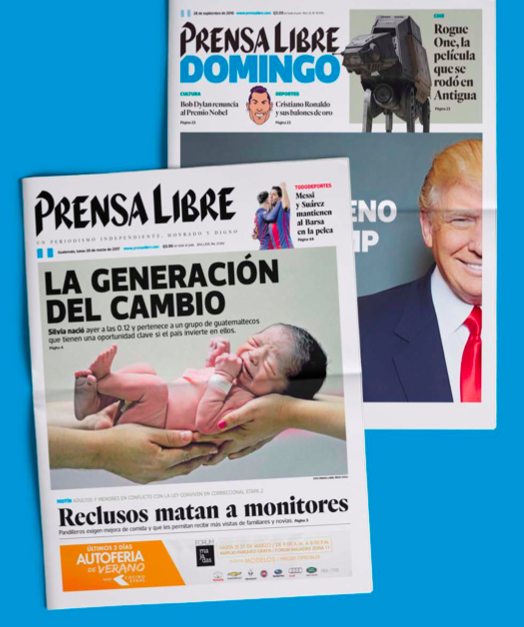 Thanks to that first change in 2016, a deeper remodelling was undertaken, and the staff got used to a more digital mentality and multiplatform output. Their experience, the data and the audience were solid enough pillars to build a strategy on for the future. The more floors their new “building” had, the better. The newsroom moved from digital first to mobile first. It put the user right at the heart of the operation, improved relations between different areas of the newspaper and bet on innovation. It is now organised around a central super desk, the motor and axis of their new multimedia news turbine. The new centralised decision making process unleashed newsroom creativity.

“These past two months have been the most interesting, enriching and fun in my 20 years with Prensa Libre”, said one of the paper’s editors when they celebrated the relaunch on March 20. The newsroom boss, opening and closing editors, and graphics and visual editors all sit at the central desk. They work as one. The editors also have direct responsibilities over certain platforms. That all makes functional creation and distribution flow 24 hours a day.

“Now we are a multimedia newsroom”, says Doménica Velásquez, the newsroom and central desk boss: “Our digital edition is doing news 24 hours a day and our print edition has taken a step forward. It explains why things have happened and what the consequences are. That way of creating and distributing content reinforces the commitment the founders of Prensa Libre established with this country, and it allows us to do better journalism, a journalism that is always focused on the audience”.

The central desk basically combines everyone’s talents in an intelligent way, and works closely with the best journalists in the room, who are in charge of topical sections. Everyone works to two rhythms: breaking news and day-after journalism. When a story breaks, two systems start work: one for live coverage, the other for the next day’s print publications. One talks about what, the other talk about why and what for. And it all happens naturally. Until the new plan was put in place, the print deadline set the tone for the whole paper.

Now, there are rolling digital deadlines, as well as the nightly print deadline. The digital ones are organised around the online habits of Guatemalan Internet users, and the team plans ahead to avoid bottlenecks. 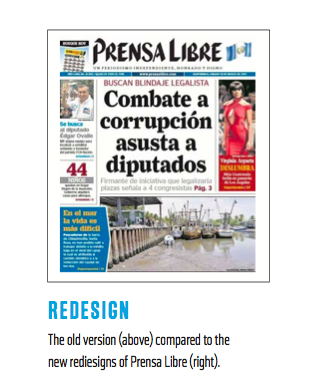 Beyond the editorial organisational aspects, Prensa Libre has also sought to remodel its distribution, both digital and print. The print edition was redesigned, with new fonts, more order, more clarity and a better reading rhythm. The print process was also redesigned, so that the pages can be laid out according to the stories that need telling, rather than the old pre-defined section spaces.

Reporters and editors have adapted well to those changes and the tool works well to be able to tell stories in the new manner. They are no longer, for example, obliged to fill up eight pages of foreign news just for the sake of it. The result is the appearance of a renewed Sunday version of the paper, a new news product that is more like a magazine than a newspaper. The daily paper is now more focused on being “the day after paper”, while Sundays are all about relaxing and reflecting on the week’s events.

On the back of 2015’s responsive layout, the digital version has seen improvements to the user experience as well, both for reporters putting front pages together and users who enjoy a faster loading page. New digital products, like the “Por la mañana” newsletter were created.

Most of Prensa Libre’s revenue still comes from print ads, but the paper has been able to maintain its foundational values throughout the process. The company is now ready to face the future. It is no longer just the newsroom of a daily newspaper but a newsroom that produces content for the group’s different media products, both online and offline.