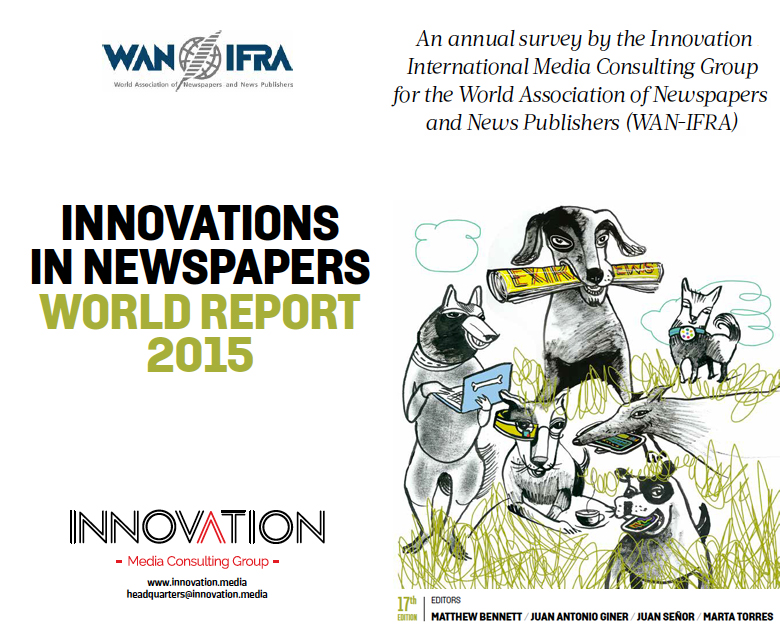 Newspapers and media organisations around the world, large and small, older and newer, are now beginning to make sense of the tumultuous last few years. What before will have looked to many like plain old destruction—of formats, habits, brands and jobs—is now beginning to look slightly more creative. Readers still demand news and journalists are still eager to provide it; we just have to learn how to make it all fit together. In some places, the word ‘profit’ is even being whispered.

Tsunamis of information sloshing around the globe, and instant access to it all via multiple devices and platforms, many of which now buzz in our pockets, mean readers need both more meaning and less fluff, more habits and less time-wasting. The enormous quantities of data are also an open invitation to global news organisations to go on a giant treasure hunt, to see what interesting global stories might be found and reported.

Google in search and Facebook in social continue to cause headaches because they own the most user mindshare and eyeballs and we live in an attention economy. That is the first obstacle any media outlet must overcome. Different countries and business cultures are responding in different ways. Notable over the past 12 months have been Google News’s departure from the Spanish market and, more recently, the search giant’s Digital News Initiative in Europe and the social behemoth’s Instant Articles.

The most concise summary of the situation is perhaps the phrase attributed to Mashable CMO Stacy Martinet, which you can find along with other select quotes on the changing media landscape in the Voices section of this year’s report: “We live in streams on our phones, and brands need to be in those streams too”.

Within that landscape, the core mission of journalism is as it ever was, and that core faces new threats.

The murder of Charlie Hebdo cartoonists in Paris reminds us of the existential importance of a free press, which should not just be protected by fully democratic states but valued and nurtured. It is worth investing in and making sacrifices for, a fundamental part of how modern countries work. Peter Oborne’s angry and inspired letter of resignation from The Telegraph, full of rage at his former newspaper’s fawning or even non-existent coverage of the HSBC scandal, rams home the point: “Newspapers have what amounts in the end to a constitutional duty to tell the truth”. Few readers would disagree with such sentiments, but the relationship between the media, political power and big business continues to evolve. Transparency and independence are competitive advantages.

On a business level, the field is splitting more clearly between Authoritative Leaders, who offer their readers some economically valuable version of ‘more’ of whatever news niche they focus on, and Ad Distractors, whose business model uses news only as bait to hook readers in, before sending them off to feed on banners, pop ups, branding and special offers prepared by advertisers. An interesting third group, which we might term Crowdfunded Reader Champions, is emerging, where the emphasis is more on the reader’s role in supporting an independent press. Many media outlets are stuck in the middle, without a clear idea of what they are really trying to do.

“As Google’s Executive Chairman Erich Schmidt has said for years”, writes the Chairman of Impresa, Francisco Pinto Balsemñao: “the Internet is becoming a cesspool, making it even more important to have professional media filtering and selecting a hierarchy of news and offering different opinions on current issues, using professional criteria and following editorial guidelines subject to sanction in case of breach”.

Across all models, a strong editorial voice is required to provide some kind of sense and direction to the confusing stories pouring on to readers’ multiple devices and into their niche attention streams from around the world. Projects that do not provide readers with that leadership do not have a hope of standing out enough to deserve their regular attention.

In this our 17th Innovation in Newspapers report, you will be able to read more about all of these developing trends and about many examples of real media organisations in different countries adapting to the new environment we all exist in. How you apply the lessons the stories contain is up to you.

As Robert Thomson, Chief Executive of News Corp, concludes: “If the phones are smart, we in newspapers must be smarter still. A journalist should be the smartest person in room – the challenge for us is that the room just got much, much larger”.

GET A COPY NOW