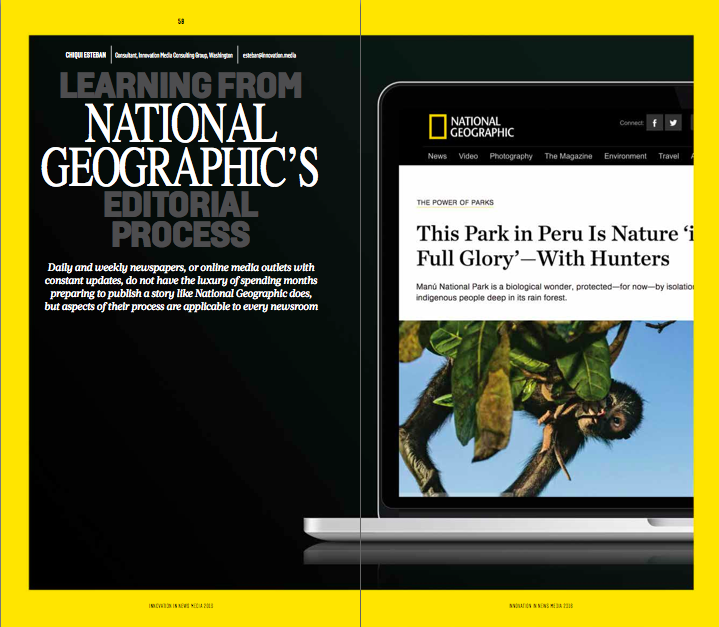 Daily and weekly newspapers, or online media outlets with constant updates, do not have the luxury of spending months preparing to publish a story like National Geographic does, but aspects of their process are applicable to every newsroom.

National Geographic is not a newspaper or even a “news” magazine: its editors know what is going to be published (subject to changes) up to two years in advance, but online, daily and weekly newspapers can learn a lot from the publication’s editing process. Whilst National Geographic does not produce many graphics or maps each year, they are all impeccable. The process leaves no stone unturned, no ‘i’ without a dot. What makes this process special, according to John Tomanio, National Geographic’s Graphics Director, is the “time and the multiple round of edits. All our work gestates over several months. That gives us plenty of time to try different approaches”.

That’s okay if you have months to prepare, you might be thinking, but what about daily, weekly or several-week deadlines? At National Geographic, a single graphic might take six months to produce from the moment is assigned to the day it goes to press, but editors juggle several at once. Time is split between managing longer-term assignments and shorter pieces for the website. That situation is not so different from a special project on a news website.

The very first step is to pitch story ideas. Every idea needs approval, and then the story is assigned to a story team, with a leader. The team leader meets with photographers, designers and writers and decides what the graphic is going to show. That gets presented to the magazine editor and other leaders at a meeting called a “Coverage Plan”.

The idea of story teams is interesting for newspapers: small clusters of professionals where visual people work closely with designers, photographers and writers as equals, not as a service desk. The end product must work as one narrative, not as a collection of separate pieces. The visuals must be right for the story and graphics, maps and photos have the same tone. 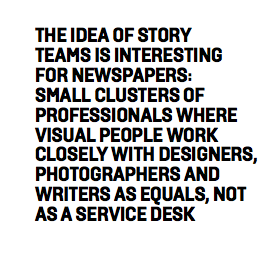 Feedback from the beginning saves a lot of time and is also something shorter-term media can use. Just like with movies, the more you work on the script, the more time you’ll save during production. After the idea is approved at the Coverage Plan meeting, a first draft is presented to the creative director and editor, but these steps can be merged with the previous process if your newsroom works with shorter deadlines.

Everybody then dives in and the project will go through many different stages. Freelancers will work on the assets and researchers, producers, subject matter experts and copywriters will get involved. The graphic will go through several critique meetings. “The work is reviewed in a creative ‘safe space’”, explains Tomanio: “Any graphic editor can make any comment about any piece, and all pieces are reviewed in turn. Everything gets reviewed several times.” That is an example all newsrooms can follow: have regular get-togethers to see how things are going. You might have a weekly team meeting with the editor and shorter daily updates after lunch, where team members can explain what they are doing and flag any problems.

One of the biggest advantages of working at National Geographic is having access to experts. John Tomanio says that National Geographic “partners with scholars and other experts to conceive and vet each graphic.” Faster paced media can check in with experts frequently, especially when stories and pieces have a certain level of complexity, or become more entangled over time. The more often you ask them the right questions, the sooner you will be able to avoid, or fix, problems. Get them to look at the final product.

The whole newsroom can comment on a final review of the whole magazine, where anyone can stick notes to the pages with suggestions. Once everything has been developed and reviewed to the satisfaction of the story team leader, the graphic goes to a director’s review, where those in charge of different areas look over the final changes. Then they sign off on the project. 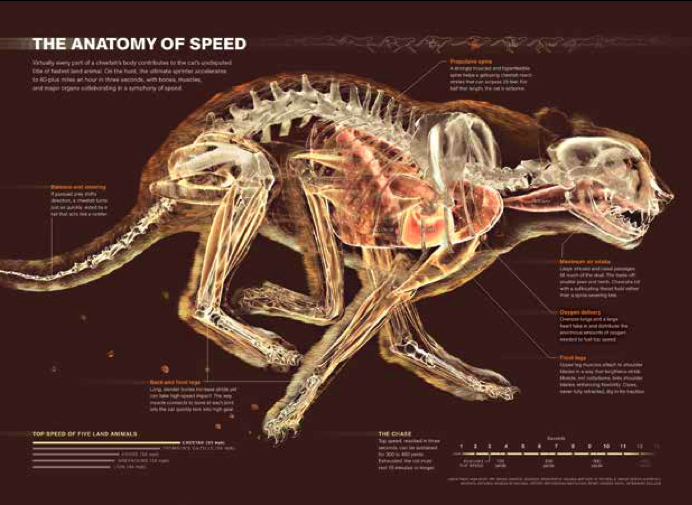 After that come all of the technical checks: producers and print specialists check colours, crops, line widths; the copy is edited, the research reviewed, experts vet things. These details are important: if the printing is bad, or if the code doesn’t work, or if the text contains errors, readers are not getting the best product.
Having editors take a last look at all the little details can mean the difference between a good graphic and a great graphic. The small details are not just words, images and design, but the different aspects of the technology and printing process. Any small mistake could bring all your hard work crashing down.

While the magazine goes through the editing, research review and printing process—which might take 2-3 months—producers and designers work on the iPad and mobile app versions. This makes sense at National Geographic but may not do so in other places, where the digital product must come first or be done in parallel for an effective use of time and processes. Either way, the digital version should be subject to exactly the same editorial thoroughness as the print version. Test everything.

After the print version is sent out into readers’ hands around the world, the digital version can and should still be reviewed, edited and corrected after it goes live, if faults are found at the last minute or are pointed out by readers.

The important thing is to have a process and to get experts and editors to review and critique it all, multiple times if possible. You will almost always learn something for next time too. Edit the pieces, and then edit and improve the process. 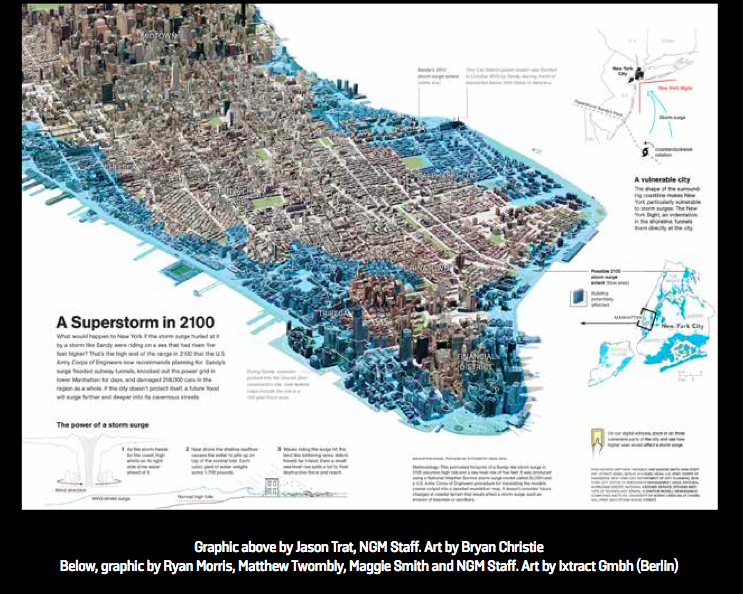 INNOVATION’S TAKE
We can all learn from National Geographic’s editorial process, however large or small our media outlet. Higher quality means happier readers and less chance of making an embarrassing or trust-eroding mistake, both on longer projects and during the intensity of a fast-moving major breaking news story. Proper processes and checklists also mean a constructive, professional review of failures can be made in the newsroom during the debriefing to improve for next time without undue acrimony and accusations taking over.