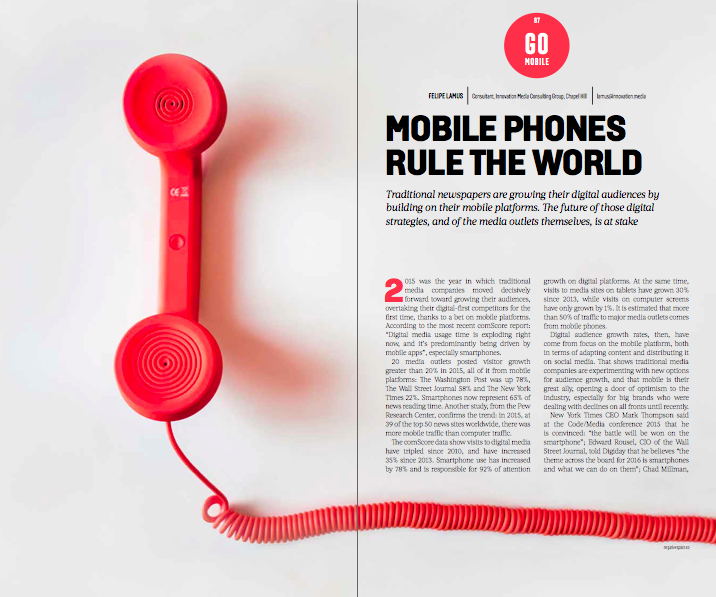 Traditional newspapers are growing their digital audiences by building on their mobile platforms. The future of those digital strategies, and of the media outlets themselves, is at stake.

2015 was the year in which traditional media companies moved decisively forward toward growing their audiences, overtaking their digital-first competitors for the first time, thanks to a bet on mobile platforms. According to the most recent comScore report: “Digital media usage time is exploding right now, and it’s predominantly being driven by mobile apps”, especially smartphones.

20 media outlets posted visitor growth greater than 20% in 2015, all of it from mobile platforms: The Washington Post was up 78%, The Wall Street Journal 58% and The New York Times 22%. Smartphones now represent 65% of news reading time. Another study, from the Pew Research Center, confirms the trend: in 2015, at 39 of the top 50 news sites worldwide, there was more mobile traffic than computer traffic.

The comScore data show visits to digital media have tripled since 2010, and have increased 35% since 2013. Smartphone use has increased by 78% and is responsible for 92% of attention growth on digital platforms. At the same time, visits to media sites on tablets have grown 30% since 2013, while visits on computer screens have only grown by 1%. It is estimated that more than 50% of traffic to major media outlets comes from mobile phones.

Digital audience growth rates, then, have come from focus on the mobile platform, both in terms of adapting content and distributing it on social media. That shows traditional media companies are experimenting with new options for audience growth, and that mobile is their great ally, opening a door of optimism to the industry, especially for big brands who were dealing with declines on all fronts until recently.

New York Times CEO Mark Thompson said at the Code/Media conference 2015 that he is convinced: “the battle will be won on the smartphone”; Edward Rousel, CIO of the Wall Street Journal, told Digiday that he believes “the theme across the board for 2016 is smartphones and what we can do on them”; Chad Millman,VP of Digital Content at ESPN, told Nieman Lab in an interview that: “mobile is everything. We always have to be thinking about mobile first”.

Media companies must go where their audiences are, and audiences are increasingly on smartphones. Mobile is the ideal platform to reach younger readers, and to engage better with older ones. We live in a multi-platform world, and the sign above the gate reads “mobile”.

There are several factors emerging as key to a successful mobile strategy. First, build a great smartphone app. Then, offer serious news in small formats, with the best multimedia stories to hook readers into interacting with them. The most important thing is to always experiment.

Big global digital platforms are working to optimise their mobile offerings for themselves and for media companies, who are publishing their content on third-party platforms such as Facebook Instant Articles, Snapchat Discover or Apple News. This part of a media outlet’s strategy creates income, monetisation and analytical challenges.

According to The Mobile Economy 2016 report from GSMA, 2015 was a year of constant growth for the global mobile industry, with 7.6 billion mobile connections and 4.7 billion unique subscribers, with a forecast rise to 5.6 billion subscribers—or 70% of the world’s population— by 2020. Most of them, 90% of the next billion subscribers, will come from developing countries. 4G coverage has accelerated to more than a billion 4G connections in 151 countries.

The ad industry is trying to adapt too. In 2014, just 8% of ads were for mobile platforms: $25 billion in the US alone. Mobile ads are now growing at more than 34% year-on-year.

INNOVATION’S TAKE
Mobile is a reality, and mobile-first, not digital first, must now be our focus. Digital is mostly mobile now, and that trend is set to continue over the next few years. We must make sure our sites, apps and news content experiences are ready for our mobile readers.