Posted at 19:54h in Insights, News by Innovation Media Consulting 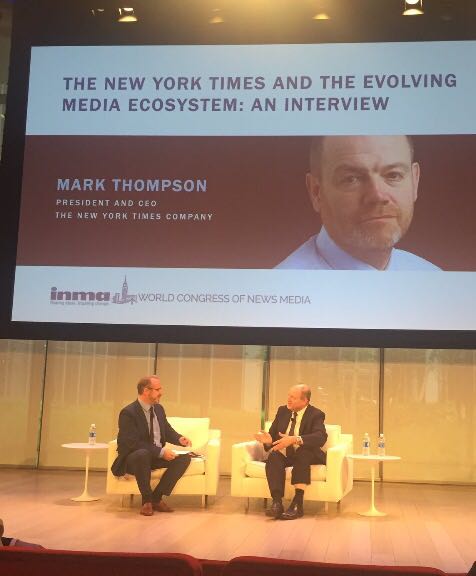 INNOVATION Media Consulting Partner Juan Señor interviewed Mark Thompson, president and CEO of The New York Times Company on Tuesday at the INMA World Congress in New York. Over the course of an hour, they discussed digital subscriptions, innovation, credibility and fake news, managing the print transition, and how to navigate all of those changes.

Here are some of the proceedings according to those in the audience on Twitter:

Juan Señor began the interview by asking Thompson about a new subscription model. The Times’ goal is to reach 10 million subscribers.

“I think the idea that we should aspire to have 10 million [subscribers] or more is not in any way crazy,” Thompson said. “I think that’s the kind of scale and ambition we should have.”

“Broadly, we saw that the proportion of new subscribers coming from the rest of the world was staying steady with previous quarters,” he noted. “So, you have an intensely American story, yet we’re actually getting 14% of new subscribers from outside the U.S.”

How has the NYT has managed its transition from digital ad revenue to reader revenue?

– I have not yet met a news publisher who is in risk of changing too fast, says NYT CEO Mark Thompson at #INMA17. pic.twitter.com/ZfGBW1hE5p 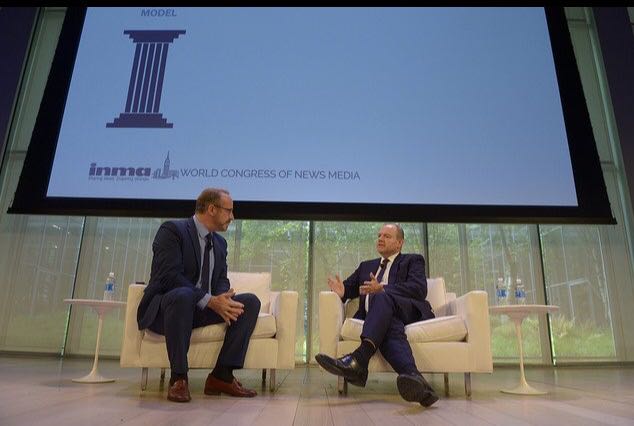 Explain the new strategy to transform the NYT from a “world class news brand” to a “world class consumer brand.” What does this mean precisely ​regarding​ audience research, analytics and ​the ​customer relationship? 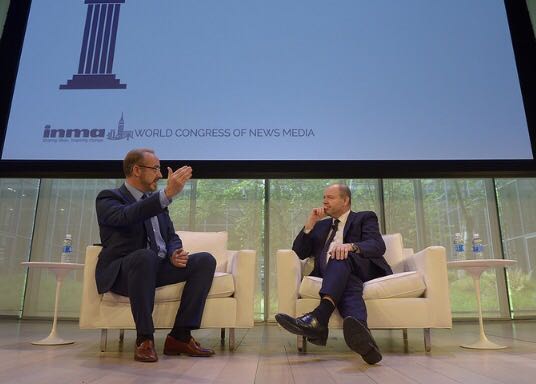 How will you transition from selling content to selling a membership in a community?

Events, e-commerce aren't going to save our biz. Journalism will do it with digital subs -Thompson @nytimes #INMA17

Thompson: add-on business will not save the @nytimes; bulk of revenue must come from sales. #inma17 pic.twitter.com/8YOqNgiYiy

The Live events business are add ons to the @nytimes strategy, but nothing takes away from the importance of the journalism. #inma17

Events are cash-flow positive and good for the brand. But it would not save the news business, says Mark Thompson, CEO @nytimes at #INMA17

Candid advice as to dos and don’ts ​for​ publishers contemplating a similar journey from over-dependence on digital ad revenue to reader revenue?

Mark Thompson @nytimes: Print is now 1/3rd ad revenue and 2/3rd subscription revenue. I expect something similar on the digital side #inma17

"I don't want to look back & say we didn't experiment enough. This is a race against downward lines on PPT" Mark Thompsen, @nytimes #INMA17 pic.twitter.com/kXf69inKZ3 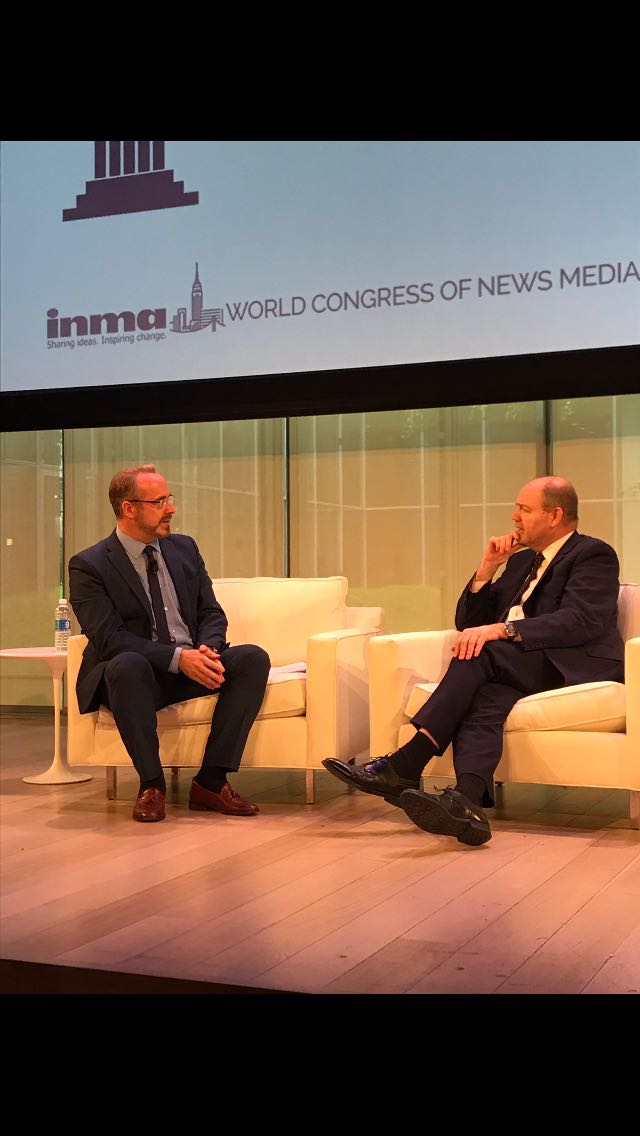 How do you use print as a ‘bridge to the future’ – and is it a stated intention to make print ‘disappear’ in due course?

Is your vision to sell ‘things,’ experiences or ‘belonging’ in addition to content/journalism to get to the $800 million?

Mark Thompson, CEO @nytimes at #INMA17 – 'our business is journalistic storytelling, no one should beat us at that.'

Mark Thompson, @nytimes CEO: We don't have any history in broadcast journalism, “so we can be a disruptor.” #inma17

How do you see digital advertising evolving?​ Is branded/native advertising delivering on the hype and expectations of two years ago? NYT Studio’s performance?

.@nytimes wants to be a destination. And: the blank spaces we sold in print don't exist on smartphones. Vid with CEO Mark Thompson. #INMA17 pic.twitter.com/BAwS70F95M

Mark Thompson: What is the angle of attack? That's the y-o-y growth of digital revenue – not digital readership. #inma17

Juan Señor then focused on visual journalism in his line of questioning. “You have made visual journalism one of the cornerstones of how the NYT newsroom will deliver the content expected in the digital age – what does this mean precisely?” he asked.

Mark Thompson, @nytimes CEO on new technology like #VR: “It’s been a way of funding experimentation, having crazy fun…" (1/) #inma17

@nytimes …finding great partners to go along the journey, and trying to redefine our brand around innovation." (2/2) #inma17

Mark Thompson CEO @nytimes VR and 360 have been cash positive to us since day one. #editorialanalytics #INMA17

From the plethora of multi-media formats you are exploring today – videos, photos, infographics, graphics, podcasts – is there something that stands out and triggers subscriptions?

Thompson: “You can’t fool yourself that something as big as the palm of your hand can be the same as a broadsheet newspaper." #inma17 pic.twitter.com/Ilmqf242d0 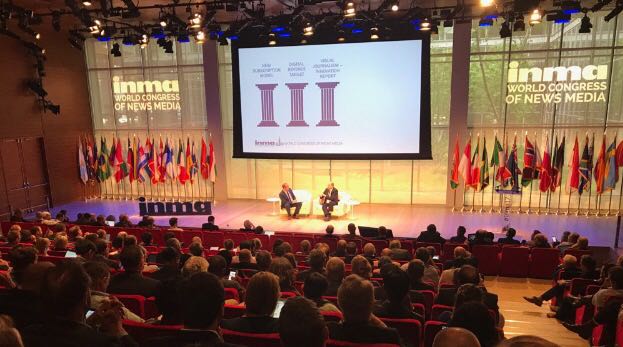 Where are we with the implementation of the Innovation report?

Is your newsroom still too paper-centric? Is that still the ‘king’ platform?

Thompson: “We want to see constant innovation in our print product.” #inma17

How do you transform a text-based newsroom into a visual newsroom?

Mark Thompson CEO @nytimes Change must come from within the newsroom. Let them tell you. #editorialanalytics #INMA17

@nytimes constantly challenge their print team to look at innovations across the brand. It is worth 62% of their ad revenue #INMA17

"We don't want to be beaten in innovation on journalism storytelling." MarkThompson @nytimes #INMA17

@nytimes doesn't want other entities beating them in their own journalistic space. They want to experiment, test and innovate #inma17

In his final 15 minutes with Thompson, Juan Señor focused on mobile. “It’s been said within the NYT​, that mobile​ ​is​ the platform of the future present. What does that mean? Mobile=massive audiences on a massively reduced space to place advertising; ​h​ow on earth do you make money on mobile​?” he asked. 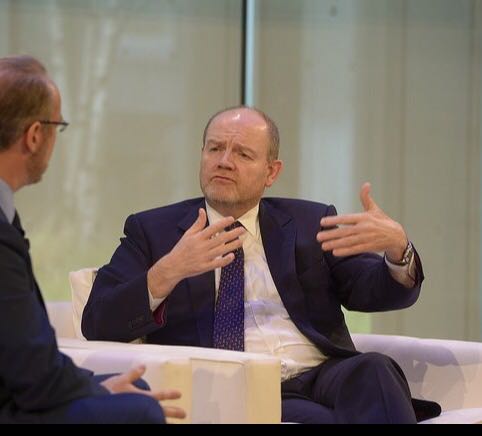 Tablet is nice platform but already mature. It is smartphone that we focus on- Thompson, CEO @nytimes #INMA17

@nytimes don't talk about a mobile 1st strategy, for them it's a smartphone 1st strategy. This is where battles will be won & lost #inma17

Thompson CEO @nytimes The battle will be won/lost on the smartphone. The tablet has matured, it is what it is. #editorialanalytics #INMA17