Reinvention of the Newspaper for Tablets 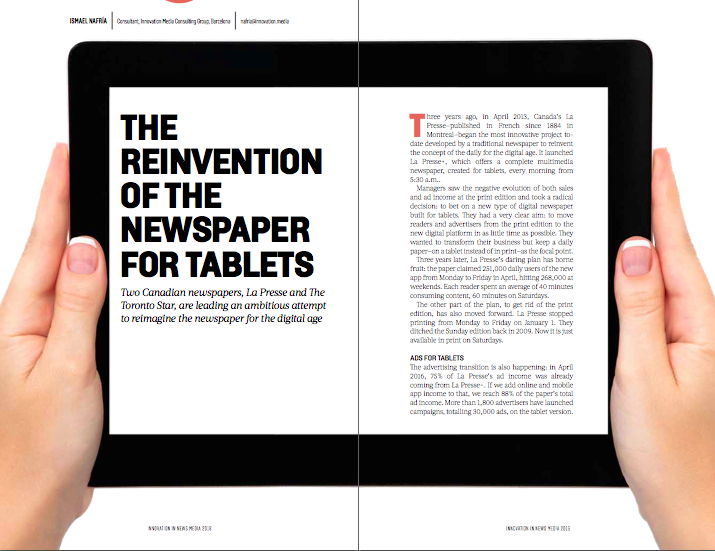 05 Dec Reinvention of the Newspaper for Tablets

Two Canadian newspapers, La Presse and The Toronto Star, are leading an ambitious attempt to reimagine the newspaper for the digital age

Three years ago, in April 2013, Canada’s La Presse — published in French since 1884 in Montreal — began the most innovative project to- date developed by a traditional newspaper to reinvent the concept of the daily for the digital age. It launched La Presse+, which offers a complete multimedia newspaper, created for tablets, every morning from 5:30 a.m..

Managers saw the negative evolution of both sales and ad income at the print edition and took a radical decision: to bet on a new type of digital newspaper built for tablets. They had a very clear aim: to move readers and advertisers from the print edition to the new digital platform in as little time as possible. They wanted to transform their business but keep a daily paper—on a tablet instead of in print—as the focal point.

Three years later, La Presse’s daring plan has borne fruit: the paper claimed 251,000 daily users of the new app from Monday to Friday in April, hitting 268,000 at weekends. Each reader spent an average of 40 minutes consuming content, 60 minutes on Saturdays.

The other part of the plan, to get rid of the print edition, has also moved forward. La Presse stopped printing from Monday to Friday on January 1. They ditched the Sunday edition back in 2009. Now it is just available in print on Saturdays. 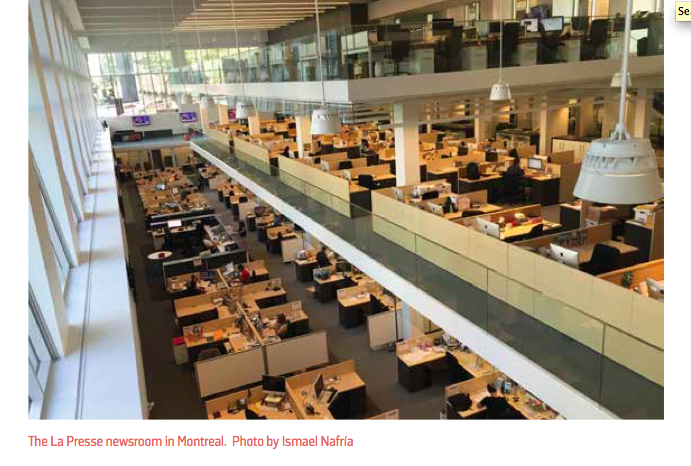 The advertising transition is also happening: in April 2016, 75% of La Presse’s ad income was already coming from La Presse+. If we add online and mobile app income to that, we reach 88% of the paper’s total ad income. More than 1,800 advertisers have launched campaigns, totalling 30,000 ads, on the tablet version.

Younger people are reading La Presse more: previously, 46% of print readers were aged 25- 54; that figure has increased to 63% for tablet readers. Conceptually, it is very similar to a print newspaper, with a structure, a finished product and set number of “pages” (screens), but with the addition of all sorts of multimedia elements. The tablet edition is organised into sections, just like a print paper, and every section is filled with news and ads. The app only works with tablet in horizontal position.

All La Presse reporters and editors work for La Presse+, deciding which format elements — text, video, graphs, animations, data and maps — ad templates will be used to tell each story. The day’s most important issues are presented as a dossier, with several tabs on the same screen. The end product is a very varied and complete series of news formats that La Presse says hold their readers’ attention for several minutes.

One of the main obsessions for the creators of La Presse+ was app usability. It is a very interactive product and attention was paid to the smallest of details in order to offer an immersive, but not intrusive, experience. Every element— for both the news and the advertising—depends on what the user wants to do: everything else is out. La Presse invested $40 million (Canadian, 0.763475 USD at May 20, 2016) in the project, which it sees as vital for its future.

A sizeable part of that investment was spent on developing a new platform that allowed journalists to publish La Presse+, as no ready- made solution could be found.

Chairman and publisher Guy Crevier told Innovation Media that: “three years after the launch of our La Presse+ tablet Edition, La Presse has transformed itself from a traditional newspaper to a successful digital media.

On September 15, 2015, using the same technology platform and the same product concept as La Presse+, another Canadian daily, The Toronto Star, launched its Toronto Star Touch app.
Star managers have at no time said the plan is for the product to replace the print edition. Digital operations manager Christopher Good- ridge told Innovation Media that it is regarded as a complementary product that improves the paper’s current digital range and offers the company a platform for the future.

This less radical idea has meant growth of the Toronto Star Touch has been more modest than that of La Presse+. In April, seven months after launch, the app had been downloaded 230,000 times and had 26,000 daily users, and a little over 60,000 unique weekly users (some might visit several times a week but are counted once).

The level of user engagement with the app is much higher than on the website. Instead of an average of 6-8 minutes online, people spend 23- 25 minutes on it from Monday to Friday and 28 minutes on average at the weekend.

Goodridge explained that advertisers were responding well to the new offer, especially car and financial companies. Branded content campaigns have also been developed for sales and travel companies.

Thanks to an agreement with La Presse and the use of its platform, the Toronto Star’s launch investment in 2015 was smaller, although still considerable at 9.6 million Canadian dollars.

The Toronto Star newsroom—whose staff grew by 70 journalists, editors, designers and multimedia specialists for the launch—has also had to radically modify its way of working to be able to produce the Star Touch app every day. The work flow has been redefined, new positions have been created and skills have been improved to created stories for the screen (screen-based storytelling). Almost 90% of Star Touch users are in the Canadian province of Ontario, mostly around Toronto.

INNOVATION’S TAKE:
La Presse’s experience above all, going all in on its tablet edition during the week, and burning almost all of its print bridges, offers hope. Average daily reader engagement time—40 minutes on weekdays and 60 minutes at the weekend—equals the average amount of time users spend on Facebook apps on their mobile phones. Some media outlets are discovering what it takes to win battles in the war for readers’ limited attention.