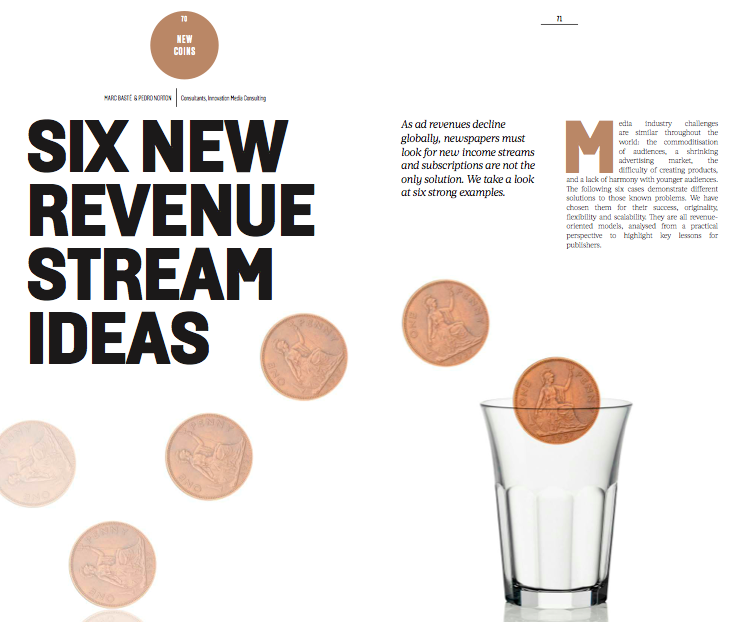 As ad revenues decline globally, newspapers must look for new income streams and subscriptions are not the only solution. We take a look at six strong examples.

Media industry challenges are similar throughout the world: the commoditisation of audiences, a shrinking advertising market, the difficulty of creating products, and a lack of harmony with younger audiences. The following six cases demonstrate different solutions to those known problems. We have chosen them for their success, originality, flexibility and scalability. They are all revenue- oriented models, analysed from a practical perspective to highlight key lessons for publishers.

Launched in 2013 after a record crowdfunding campaign, De Correspondent publishes daily news but it doesn’t chase the latest breaking news. It prioritises “relevance over recentness” and focuses on original content. It fights for ideals, not ideology. Above all, it believes “a one- way, producer-consumer relationship between a news medium and its readership is a thing of the past”. It encourages its 52,000 readers (members) to participate.

With the help of Respondens, its proprietary content management system, journalists share their story ideas even before they start reporting. They are clear about what they want to know and why they think it matters. They ask for specific input from readers and expert members join the conversation with valuable insights or inside knowledge.

They use new formats like public notebooks, extensive reconstructions, short news stories, movies and courses, and they are building a loyal, growing community. Several Correspondent pieces have been sold abroad to brands like The Guardian or Wired. Now they want to go global. Engagement is the key. And they have no ads.

Launched in the Netherlands in 2014, Blendle is aiming to be the iTunes or Spotify of news. Instead of paying for a whole subscription to one publication, it lets you pay for single articles from several newspapers and magazines, and it comes with a money back guarantee. If you don’t like an article, just ask for your money back. Blendle lets people share articles on Twitter and Facebook, and you can see which stories your friends are reading. This platform is also ad free.

Publishers can set the price of each individual article from as little as $0.15, and get 70% of the revenue. Blendle keeps the other 30%. The New York Times and Axel Springer decided to invest €3 million in the new start-up, funding entry into the German and American markets. US partners include The Wall Street Journal and The New York Times. Blendle Premium, in Holland, offers a less metered approach: for €9.99 per month, users can read up to 20 stories a day. Micropayments have been tested for a while now, but Blendle is one of the most promising solutions to hit the market so far. Other publishers are watching closely. 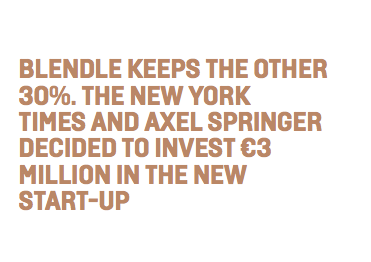 Expresso is, by far, the most influential and the biggest weekly newspaper in Portugal. Until the middle of 2014, due to difficulties of the postal coverage on Saturdays, it had virtually no subscribers. Its website was free, 100% ad- funded and not profitable.

The opportunity was there, at almost no cost, to extend Expresso’s premium presence and build a strong subscriber base. Expresso Diário was the natural answer. Preceding The Economist’s Espresso app, it is a daily digital newspaper (not a site) aimed at mobile consumption, published (after work) at 6 p.m. every weekday. Its editorial proposal is very simple: to make sense of chaotic daily information overload in 30 minutes.

The Expresso Diário and Expresso (weekly) digital versions are sold as an inseparable bundle. A staff of three manages 21,000 subscribers and generates €1.3 million in revenue.

In this our “platform era”, a sustainable business based on reader revenue is the new Holy Grail. Jessica Lessin, a 33 year old former Wall Street Journal reporter is The Information’s founder and CEO. She is building a pure subscription model covering the tech industry. Again, the site runs no ads and the subscription price is $399 yearly, or $39 monthly: about what the WSJ charges. In just three years, her site has became a profitable business with over 10,000 subscribers from 84 countries, including Silicon Valley stars, entrepreneurs and investors, and it has built a solid insider community around the brand. Lessin herself is “one of them”, and Mark Zuckerberg went to her wedding.

The Information delivers two or three deeply reported stories a day, pushed out to clients via email, with pieces running between 800 and 4,000 words. There is no video on the site, just text, photos and interactive graphics. There is one big interview a week, often with a CEO.

Content is king: the whole model is based on the value, relevance and exclusivity of their stories. It doesn’t try to be everything to everyone, but the site has broken major stories, like the Snapchat IPO. Subscribers might be buying more than content, however: they can interact with Silicon Valley CEOs in the comments section, on a private Slack channel, and on monthly offline conference calls with the editor. 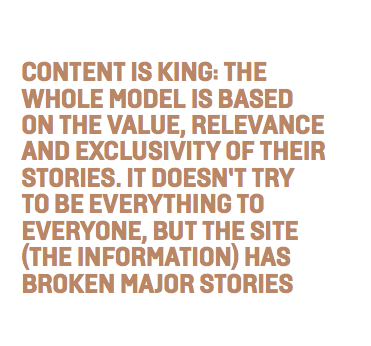 THE WIRECUTTER, THE SWEETHOME, CHEFD

Service journalism is the new black. Shopping guides are not new but combined with exquisitely rigorous journalism, e-commerce capabilities and the trust of a legacy brand, they become a relevant revenue source. In 2016, The New York Times acquired The Wirecutter and its sister site, The Sweethome, for a bit more than US$30m.

Founded in 2011 by Brian Lam, a former Gizmodo editor, both sites are highly respected for their highly reliable expert tech and household product reviews and recommendations. They are outstanding at audience engagement and trust, which led to an estimated $200 million in sales in 2016.

Times CEO Mark Thompson said their “service-focused guides align with our commitment to creating products that are an indispensable part of our readers’ lives”. With Wirecutter and SweetHome, The Times expects to expand e-commerce into many more verticals.

In 2016, it announced a partnership with Chefd, a start-up that defines itself to be “the last mile between the recipe and your front door”. They want to serve the 7 million monthly active users who read NYT Cooking’s 17,000 exclusive recipes. As ad revenues decline fast, companies need to find new business models. Service journalism is one of them.

Four million engaged subscribers is an impressive cover letter if we’re talking about a daily newsletter. If the subscribers are also women aged 22-34—a marketer’s dream—the phenomenon captures the attention of an industry whose tone and format have aged and which struggles to understand the needs and behaviour of younger people.

Founded in 2012 (yes, 4 million subscribers in less than 4 years) by Danielle Weisberg and Carly Zakin, both aged 30 and former NBC News producers, it found the right tone to successfully deliver digestible news that matters to 20 to 30 somethings: just a general notion of what’s going and why it matters.

Each blast is news summaries and links to politics, business, culture and sometimes sports. There is a website and a Facebook page but most readers read the e-mail, which is reported to have a 40% open rate. This huge engagement success has brought them some $17 million in investment from companies such as 20th Century Fox and The New York Times. The Skimm is monetised with targeted advertising — native ads or branded content — and a study service that offers “an inside look into what female Millenials think”.

The Skimm’s next challenge is to convert their super-engaged users into paying users. Their first experiment is a $2.99 a month app that updates subscribers on events, travel and must-see TV.