The Guardian: triumph or disaster? 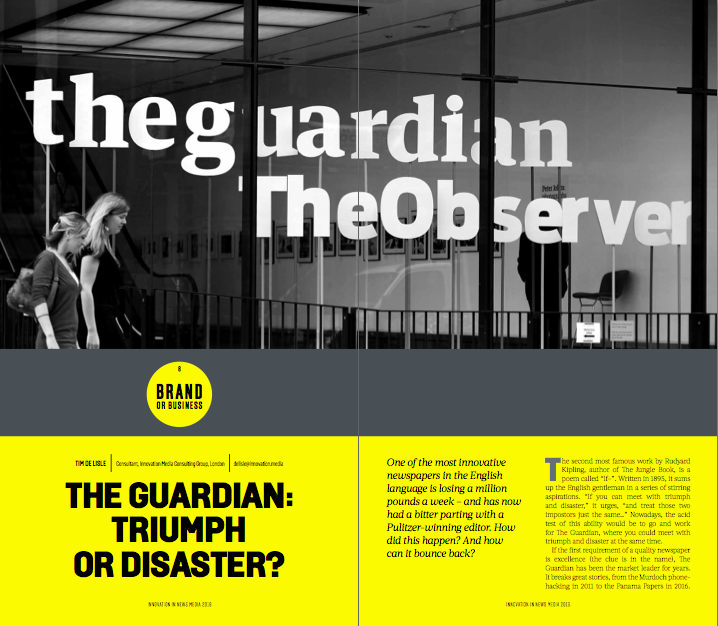 11 Oct The Guardian: triumph or disaster?

One of the most innovative newspapers in the English language is losing a million pounds a week – and has now had a bitter parting with a Pulitzer-winning editor. How did this happen? And how can it bounce back?

By Tim De Lisle | Consultant, Innovation Media Consulting Group, London
The second most famous work by Rudyard Kipling, author of The Jungle Book, is a poem called “If–”. Written in 1895, it sums up the English gentleman in a series of stirring aspirations. “If you can meet with triumph and disaster,” it urges, “and treat those two impostors just the same…” Nowadays, the acid test of this ability would be to go and work for The Guardian, where you could meet with triumph and disaster at the same time.

If the first requirement of a quality newspaper is excellence (the clue is in the name), The Guardian has been the market leader for years. It breaks great stories, from the Murdoch phone- hacking in 2011 to the Panama Papers in 2016.

It delivers great entertainment, from Marina Hyde lampooning celebrities every Friday to Stephen Moss pastiching Shakespeare, above the masthead, when Leicester won the Premier League. And it shows great technical skill, from the design (only one colour on the Panama Papers: an unforgiving yellow, like a torch shining on a murky corner) to the headlines, even if the subs are so busy dreaming up one- liners that they sometimes forget to read the proofs.

Over 30 years, newspapers have evolved into daily magazines with some news attached, and The Guardian has led the way. Its latest innovation is The Long Read, a thrice-weekly 5000-word feature added to the comment pages in 2015, which is possibly the most New Yorkerish thing any newspaper has ever done. G2, the daily mini-magazine launched in 1992, still runs rings round its only rival, Times 2, with its turn of speed and sense of fun. And those values run through the Guardian’s journalism, from the politics live-blog to the minute-by- minute football updates. It was telling that the contest for the editorship in 2015 came down to a duel between two former G2 editors, Katharine Viner and Ian Katz, striving to succeed a third, Alan Rusbridger.

A modern newspaper has to be eclectic and surprising without losing its coherence. The Guardian tent is big enough to stretch from the eco-warrior George Monbiot on the outraged left to the former Times editor Simon Jenkins on the urbane right, yet the paper has a clear voice of its own: literate, conversational, amused, progressive. As a brand, it is as sharply defined as the Mail or the FT, and more so than the New York Times (a great institution, but not so hot at flair or flavour). The Guardian knows itself so well that it has had only four editors since 1956.

Pursuing upmarket excellence would condemn a paper to a small audience, but here too the Guardian can point to immense success.

For decades, pursuing upmarket excellence meant settling for a small audience, but here too The Guardian can claim a triumph, of sorts. In March 2016 it had an average of 8,872,392 daily browsers. In March 2011, that figure was 2,722,490, so traffic had more than tripled in five years. The contrast with print is stark. Five years ago, The Guardian’s circulation was 261,116, so, for every print purchaser, it had about ten online readers. By March 2016, the print sale had slumped to 161,152, a loss of almost 100,000 paying customers, or 38%, in five years. When The Independent gave up on print at the end of March, The Guardian took over as the worst- selling national daily in Britain, lying tenth out of ten; but on the web it is second only to the Mail. For every print customer, it now has 55 online readers.

SO WHAT IS GOING WRONG?

And yet somehow The Guardian finds itself flirting with disaster. Those 55 readers, staring at their screens, bring in barely any money. Online advertising, first shredded by Google Ads, now blitzed by ad-blockers, can replace only a sliver of the revenue lost in print display ads. The Guardian makes an eight-figure loss every year, and can afford to up to a point, because its owner, the Scott Trust, has a stash of cash: after selling its half of Auto Trader in January 2014, it had over £850m in the bank. At that stage the losses were going down, but in 2015- 16 they ballooned again, to an estimated £52m – an uncool million a week. Digital revenues, while outdoing the Mail Online (from a smaller audience), were not growing as forecast. With the stock market struggling, the cash pile had shrunk to £735m. Only eight months into her editorship, Kath Viner found herself having to cut jobs: at least 100 of them in editorial, alongside 200 elsewhere, with the aim of reducing costs by 18%. 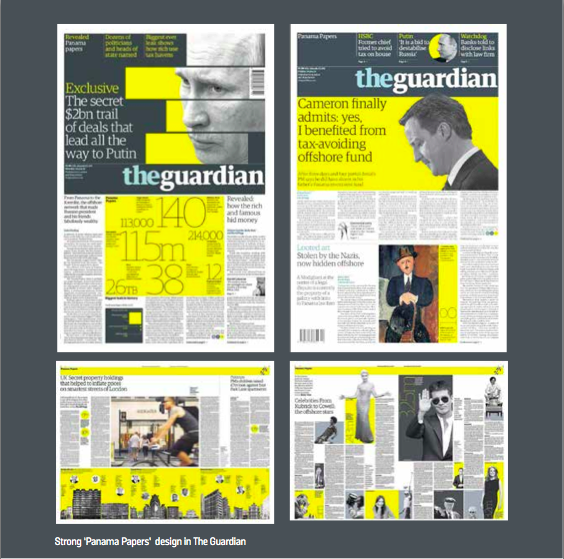 The Guardian abandoned a plan to convert an old railway shed into its own events space. It put up its cover price by 20p, to £2 on weekdays and £2.90 on Saturdays. It urged online readers to become members, at anything from £5 to £60 a month (“show deep support for keeping The Guardian open and independent”). But, as of mid-May, it had resisted the most obvious way to raise revenue: putting a paywall round much of its website. Media commentators were convinced that this is coming. The new chief executive, David Pemsel, was careful not to rule it out, saying “everything is in scope”. But the incoming chair of the Scott Trust was Rusbridger, who, in the course of a phenomenal, Pulitzer-winning 20-year editorship, had adopted the mantra “open journalism” and become evangelical about keeping the site free.

The Guardian editorial staff, who had seen off Rusbridger’s favoured successor, Janine Gibson, by voting heavily for Viner, continued to wield influence, in a very Guardian-ish way. They have a representative on the Scott Trust board, and among the candidates for the role in early 2016 was Nils Pratley, the financial editor, who argued that, like an outgoing chief executive, an editor should not move straight to the chair. “Standard principles of good governance have not been followed,” Pratley said, speaking in the passive – the passive-aggressive.

Pratley was voted onto the board, which then met to consider Rusbridger’s position as chair before he had even taken it up. Rusbridger gave a presentation defending himself that lasted an hour; Viner and Pemsel spoke, more briefly, against his appointment. The board, after some deliberation, sided with Viner and Pemsel. Rusbridger fell on his pen, which is, of course, mightier than the sword. The most glittering of Guardian careers had come to a bloody, Shakespearean end.

In a decade, The Guardian had lost £400m. But it still had £700m to play with, not to mention a great deal of talent. It has been a financial disaster and an editorial triumph, and neither looks like an impostor.

INNOVATION’S TAKE:  It’s all too easy to bash The Guardian: right-wing pundits do it for fun, apparently unaware that if they sneer at a newspaper for losing money, they will have to applaud Richard Desmond’s Daily Express. It’s much harder to find answers to its problems, but here goes. (1) Build a graduated paywall, starting at £1 a week. (2) Merge membership with subscription. (3) Offer free subs to students, who are growing up without ever catching the print bug. (4) Do less. The Guardian publishes over 400 stories a day. It was never supposed to be a quantity paper.