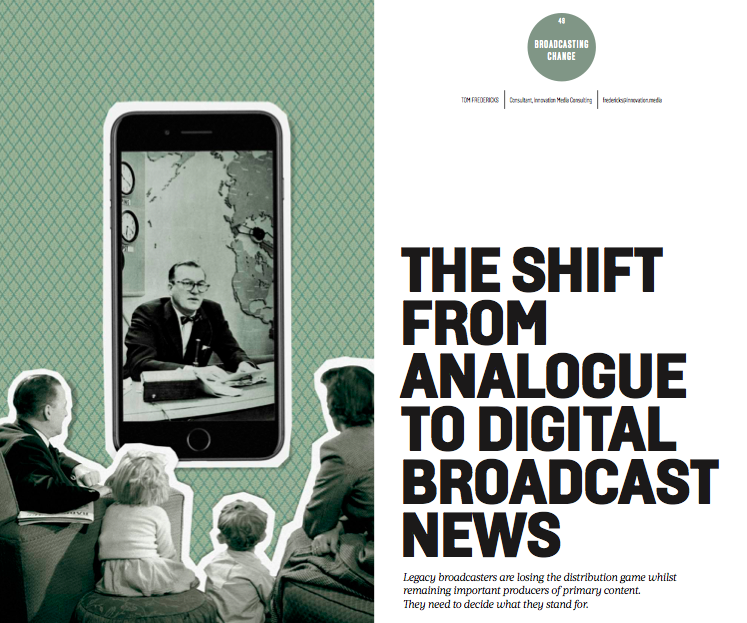 11 Dec The shift from analogue to digital broadcast news

Legacy broadcasters are losing the distribution game whilst remaining important producers of primary content. They need to decide what they stand for.

Confused news broadcasters are living in troublesome times and some are struggling to keep up. Just as they thought they had a handle on how to integrate digital into their newsrooms, the goalposts have shifted again. Legacy outlets, such as those INNOVATION works with in Georgia, India and Colombia, initially take comfort in stagnant TV news audiences that neither grow nor shrink and, while no one is suggesting appointment-to-view TV news will disappear—yet—a new generation of news consumers is bypassing TV and even computers altogether, to watch what they want, when they want, on mobile phones. Formats, distribution and revenue all pose significant challenges.

Social media channels domination is another problem, leading big broadcast news brands to create their own sub-outlets on Instagram, Facebook, YouTube, WhatsApp or Snapchat in order to tap into potential audiences and a new generation of mobile news consumers. While a minority of broadcasters like the BBC, CNN and Sky News can get audiences to consume news on proprietary apps, others find that they can invest less in their apps and are forced to use social media channels and platforms to engage viewers and share content.

Google and Facebook gobble up a huge share of the available advertising revenue, creating problems for commercial news broadcasters that public service entities do not have to deal with. In the global mobile ad market, they have market shares of 34.0% and 17.0%, respectively.

As TV advertising starts to flatten out, broadcasters need to mobilise their newsrooms to create original, engaging mobile content so that audiences get what they need and want directly. Looking at advertising revenue predictions for India—a huge, fast growing market—it’s clear that broadcasters who focus on digital—and get it right—have the potential to significantly increase their revenues. 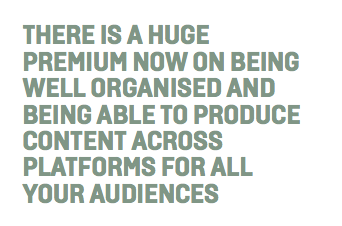 Outlets like CNN and AJ+ are ahead of the game—and profiting financially—while other legacy broadcasters are still considering their options. They must move quickly to a mobile first news strategy. They have to master the art of turning their core content into effective digital and mobile material. Otherwise the results could be paralysing.

One reason for such a historic level of inaction is that they have relied on sample audience metrics to measure success.

Advertising agencies use those figures to sell ads. Digital, however, brings much more measurable audience ratings, and many broadcast news operations have realised sample-led metrics are no longer really relevant: revenue and success can only be measured by actual views or hits. Other major reasons for inaction include a fear of change, with powerful TV anchors and editors resisting what they see as an erosion of their traditional platform.

A 2016 Reuters Institute report noted that legacy broadcasters are still “very important news producers”, but “are becoming relatively less important as distributors of news and are under growing pressure to develop new digital business models as their existing operations decline or stagnate”. The report also observes, however, that “The most successful media today have digital audiences far larger than what they have historically been able to attract to their legacy broadcast offerings”.

News broadcasters must work out exactly what they stand for and who their audiences are or they will not survive in this new hostile environment. The key is an editorial focus on story: by improving the quality of their ideas around stories, newsrooms can plan their production more effectively across different platforms. Story first, platform second, brand third.

Newsrooms that do not plan their content carefully cannot function efficiently and audiences will suffer. Amazingly, in at least two of our major broadcast projects this year—in Georgia and India —there was no coherent, formal editorial planning operation. Unfortunately, they are not unique. 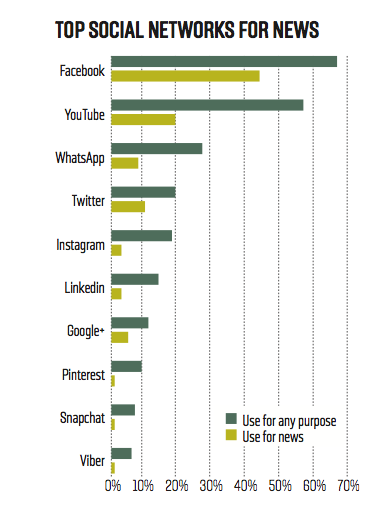 There is a huge premium now on being well organised and being able to produce content across platforms for all your audiences. A failure to plan properly at every level can have catastrophic consequences. TV, companies have lots of quality video production and expertise, but non-broadcast content producers are making more targeted and more popular video content. Vice News and The New York Times, for example. That means legacy broadcasters need to step up and reorganise their newsrooms to put mobile first.

“The growth of online video is eating into the time spent with traditional television”, says Nic Newman in his Reuters Institute Journalism, Media, Technology Trends and Predictions 2017 Report: “but at the same time it is also providing new opportunities to deliver professional, high quality long-form content on any screen. Online services like YouTube, Vox and Vevo now hold their own ‘upfronts’ for advertisers in a bid to look like television while traditional companies like NBC are investing in the video operations of Buzzfeed and Vox.” NBC Universal CEO Steve Burke says the $500 million investment in Snap is part of a strategy to drive digital growth “both organically and through investments and acquisitions”. 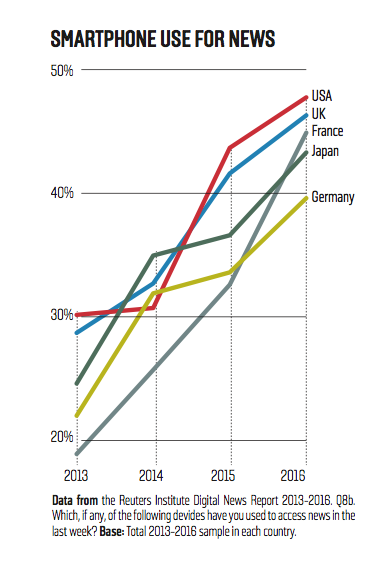 Video captures more attention (and more advertising) and provides more immediacy than other formats. And video and social mix well together. People like to share videos. The learning curve only gets steeper in the (uncertain) future. In 2015, talking about the Facebook news feed at the F8 conference, Mark Zuckerberg said: “Fast forward five years, it’s going to be [mostly] video”, adding that “If you look out even further, it will be more immersive content like AR and VR”. That was already two years ago.

The era of TV news bulletins is coming to a slow, painful end, and broadcasters must become relevant to a generation that is already used to bite-sized mobile content.
Broadcast newsrooms which have traditionally focused on TV need to continue to make great video but completely transform their processes so that mobile is their first priority. This means taking brave decisions and putting audiences first. Ignoring the reality of the mobile revolution taking place around the world will damage their relevance, reach and, crucially, their revenue.