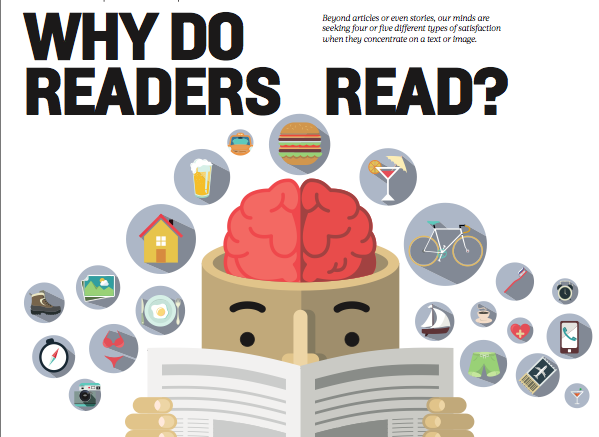 02 Jan Why do readers read?

Beyond articles or even stories, our minds are seeking four or five different types of satisfaction when they concentrate on a text or image.

Before radio, TV, the internet and smartphones, newspapers were the prime source of news and information for most people. Headlines in 80-point type grabbed our attention. Stopping by our regular newsstands or picking up the newspaper delivered to our doorstep was a daily habit. That has gone now.

A habit is a settled or regular tendency or practice, especially one that is hard to give up. A new generation with new devices and ways of connecting to the world is learning new habits. Reading a newspaper—either print or online—is not necessarily among them. Attention is the behavioural and cognitive process of selectively concentrating on a discrete aspect of information while ignoring other perceivable information. Working out what is going on with readers’ ultimate aims and how attention patterns are shifting is not so easy.

The Times of India defined five reasons why we read newspapers, five things readers are trying to accomplish: to learn about public affairs, to provide a framework for daily living, to find respite, to earn social prestige, and to enjoy social contact. A Harvard University study in 1981 defined four: surveillance (discovering information by serendipity), information seeking (proactively looking for something specific), social connection (reinforcing social group connections), and escape (the entertainment function).

Although radio and television sucked attention away from newspapers from the mid- 20th century onwards, newspapers continued to perform three of their functions well. The weak spot was information seeking. In 2017, though, print newspapers only really have one remaining advantage: Harvard’s “surveillance”: finding new information you didn’t know you might want to know (Donald Rumsfeld’s “unknown unknowns”), by turning the pages to see what the editors and reporters have decided to create for you that day.

Beyond goals, how does print and digital content fit into a reader’s attention and routines? And, more importantly for publishers, how does it all relate to revenue?

Even if the content is the same, digital versions are not read or experienced in the same way as their print forebears, which explains why the two still exist together in many places. Researchers have found that while digital news reaches far more users than print editions, the amount of attention—measured in time— that readers spend on articles still favours the immersive print experience by a large margin.

Neil Thurman at the City University of London calculated how much attention print, PC and mobile platforms attracted. He found that 88.5% of total time UK readers devoted to a range of national newspaper brands—including The Guardian, The Telegraph, The Times, The Daily Mail, and The Mirror—is spent on the print edition. Only 7.5% goes on mobile versions and a mere 4% on PCs. Guardian readers spent 43 minutes a day on the print version and only 41 seconds, on average, with the online version. Readers of The Daily Mail spent 39 minutes on print and 2 minutes online.

While the number of print readers is declining, the economist Matthew Gentzkow discovered reader attention is directly related to revenue, and—wait for it—print attention can be more valuable than digital attention, because of the total time readers spend on each format.

The Internet allows more efficient targeting of ads, so advertisers will pay more for an ad than overall, and online ads give advertisers more ways to reach a given consumer, which can reduce price. Print readers, however, pay greater attention to print, as measured by time spent on the page, than online readers spend with digital versions.

Gentzkow, then, agrees with Thurman’s findings: readers of print newspapers devote far more of their attention to articles than readers of the online version. This means publishers need not trade analog dollars for digital pennies. They should continue efforts to encourage their readers to enjoy a print version of their news. What about millennials, the psychology of younger readers? One meta study (a study of studies) found there’s a significant gap between young people’s interest in the news and their consumption of it, suggesting they expect news to find them rather than the other way around. 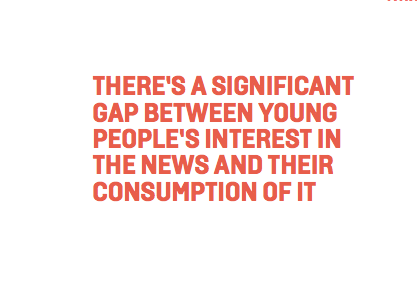 Crucially, Christopher Sopher found that, to a considerably greater degree than with older generations, many young people do not see a consistent connection between regularly “getting the news” and staying informed about the issues that interest them. Millennials get random articles at random intervals. An article they come across about, say, health care reform has little relevance in the absence of the context that comes from having followed that story regularly. Sopher says the younger generation instinctively goes elsewhere to keep up: Wikipedia, friends and family, or individual pieces of content shared through their social networks.

Then there is the dark side: too much news, news junkies and information addiction. In 2006, a personal development blogger called Steve Pavlina went on a news diet for 30 days to get rid of his craving. “The need my news addiction filled was that it gave me a sense of groundedness by connecting me with what was going on in the world”, he wrote. So why are people reading at all?

In 2015, Chris Moss, the commercial audience optimisation manager at The Telegraph wrote an article wondering what the point of news was, from a reader’s perspective: “Once the moment of delivery has passed, the information is utterly useless. It doesn’t tie me into any community or ideal or activism. It doesn’t solve any problems I might have. It doesn’t improve my day in any tangible way.”

What, he wondered, was the relationship between goal-less information and underlying psychology? “Is it because the drug – these myriad cocktails of language and tone, layout and presentation, image and voice that we call the news – is purposely designed to generate an addiction? Is it because I’m frightened of missing something? Is it something to do with the perverse appeal of other people’s bad news?”.

Capturing the lasting attention of readers may be one key to maintaining a print newspaper subscriber base. While online modes are better at curating or finding well defined categories of news, publishers should make sure serendipity seekers are well served by feeding them “unknown unknown” articles. Readers expect to see stories each day about their political leaders, fires or business earnings, they will be rewarded with the occasional investigative piece, counter-intuitive human interest story or op-ed by someone with a bright idea.