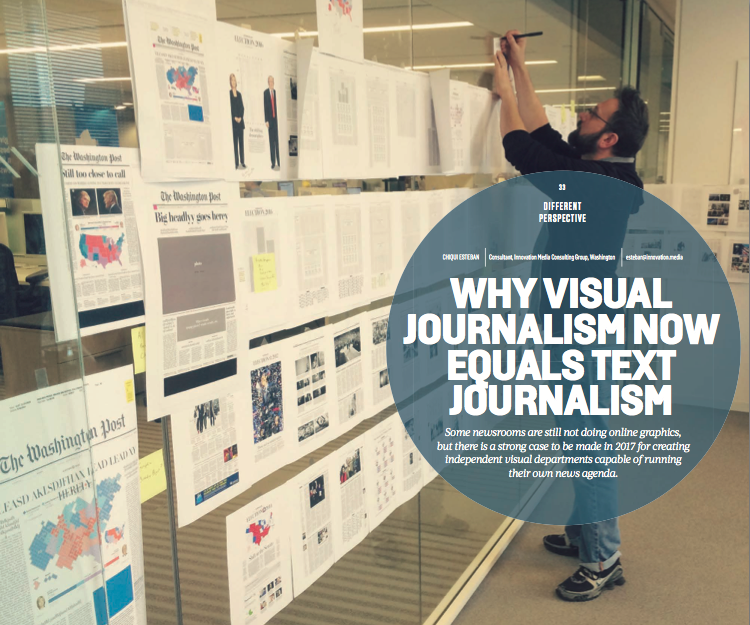 Some newsrooms are still not doing online graphics, but there is a strong case to be made in 2017 for creating independent visual departments capable of running their own news agenda.

What do graphics departments do?” is a question that has never had a direct, definitive reply.

If you asked 20 years ago, the limits between design, production and infographics were pretty blurred. Many small or medium-sized newspapers had, and still have, infographics experts who also do design. Over time, and as digital first became the norm, that question went unanswered. Graphics departments have often been at the forefront of technological development because they have had to learn how to use so many new technologies, from new software programmes to 3D illustration. They dealt with the challenge in different ways: to begin with, many outlets had separate print and online graphics shops, others went for full integration, and a third group started out separate only to converge later.

In such a competitive environment, however, media companies cannot allow themselves not to use graphics as a tool. It is a format that allows them to differentiate themselves from their competition, explain news stories properly, and drive traffic, time spent on page and subscribers.

Before we answer the first question, though, we must answer another, more basic, one: what is a graphic? If we use the old definition — anything that isn’t text, photos or video — we miss out on the chance to demand the most from skilled graphics workers.

If we want to get the very best from them, we want a “visual stories department”, which would be a proactive area of the newsroom that is able to propose its own stories and run its own news agenda, just like national, business or sports. It might also support other sections, but that would not be its main aim. A visual department that is nothing more than an add-on to serve others means graphics are subservient to text and will never be fully developed. 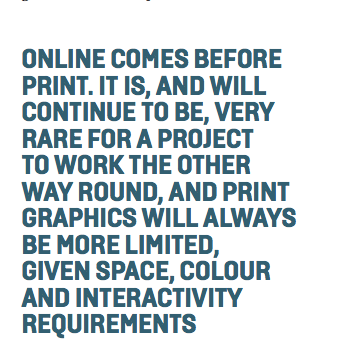 A proper visual department means you need journalists with visual skills, not just people who know how to use a piece of software, and the section needs to be at least as big as the others.

Visual journalists must be able to create stories from start to finish, from reporting to the creation of visual elements and publishing. At larger newsrooms, we might even have the luxury of specialists in different areas, but in the same way a journalist in another section needs to know how to investigate and write a text, a visual journalist must be capable of independence.

Once we have established the independence of the visual department, that is able to generate its own stories and run its own news agenda, there are two other things that need fixing.

Firstly, the question of who edits visual projects. While copy editing can be done by a central department, visual project editors should come from the same department, and fully understand visual language and references, although this doesn’t preclude visually-educated journalists from other sections overseeing projects.

Secondly, we need to deal with the question of service graphics, or graphics for others. Small graphs, local stuff that is part of the day-to-day routine for infographics experts everywhere. These images are used to explain news stories and are often key elements for readers, but they rarely attract traffic or subscribers by themselves.

Some outlets, like The New York Times, The Washington Post, NPR or Quartz, have chosen to create their own tools to try to automate the process as much as possible. This frees up graphics time and allows reporters to do their own minor visual elements. And that means everyone can work on bigger projects that do generate revenue. So if we want to do all of this, but we cannot for practical reasons have a full, large visual team, what we need are journalists with basic design and coding skills. As we grow, we can hire specialists who focus further more on reporting, code or data analysis. The section must also help develop work on video, photography and design multimedia projects.

When the visual department is big enough to start doing its own stories, its make up will change and we must then think about the following three factors.
First, it must be well staffed, with the crew able to spend time building stories out instead of just illustrating those of others.

Second, we need to think about the skills of those employees: they must be journalists first, not artists, who are able to publish digital graphics. They don’t all need to be code wizards, because a lot of online graphics nowadays are static, but they do need to know how to publish them, make them responsive and include a minimum level of interactivity where necessary. 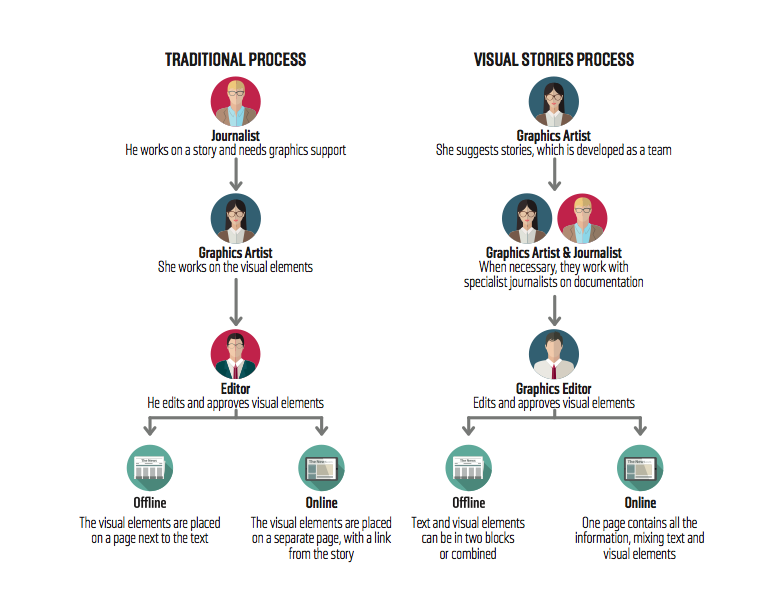 Online comes before print. It is, and will continue to be, very rare for a project to work the other way round, and print graphics will always be more limited, given space, colour and interactivity requirements. This means it is better to develop ideas online first, without the restrictions of print. All of this, of course, might mean additional investment, which might then put some news companies off.

But if we accept media outlets must strive towards providing their readers with caviar journalism, to convince them to pay for a subscription; if we believe new advertising priorities are moving away from simple questions of volume; or if we believe we must offer different content than our competitors do, then we cannot just build a small visual department. It is going to generate new stories for you, so you must be prepared to let them develop stories over time, just like text- based reporters do.

Stop thinking about graphics departments as just another way of supporting or illustrating text stories. We need visual journalism departments, and that means journalism comes first. It is all about finding the best language to tell stories, and then experimenting; about building more visual, more personal and more interactive journalism, because that is what readers are evolving to expect.

Quality and differentiation should be our standards.