How to succeed at native advertising 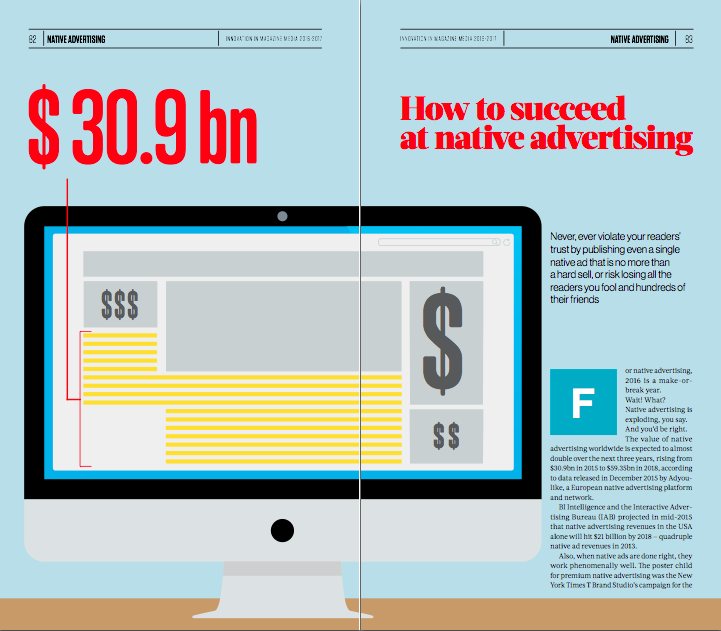 09 Nov How to succeed at native advertising

Posted at 00:00h in Magazines by Innovation Media Consulting

Never, ever violate your readers’ trust by publishing even a single native ad that is no more than a hard sell, or risk losing all the readers you fool and hundreds of their friends.

For native advertising, 2016 is a make-or-break year.

Native advertising is exploding, you say. And you’d be right. The value of native advertising worldwide is expected to almost double over the next three years, rising from $30.9bn in 2015 to $59.35bn in 2018, according to data released in December 2015 by Adyou- like, a European native advertising platform and network.

BI Intelligence and the Interactive Advertising Bureau (IAB) projected in mid-2015 that native advertising revenues in the USA alone will hit $21 billion by 2018 — quadruple native ad revenues in 2013.

Also, when native ads are done right, they work phenomenally well. The poster child for premium native advertising was the New York Times T Brand Studio’s campaign for the Netflix series “Orange Is the New Black”. The interactive piece was so popular it became one of the top 1,000 stories on the NYT site in 2014.

The Netflix campaign was just one of the T Brand Studio’s native ad successes, which taken together: 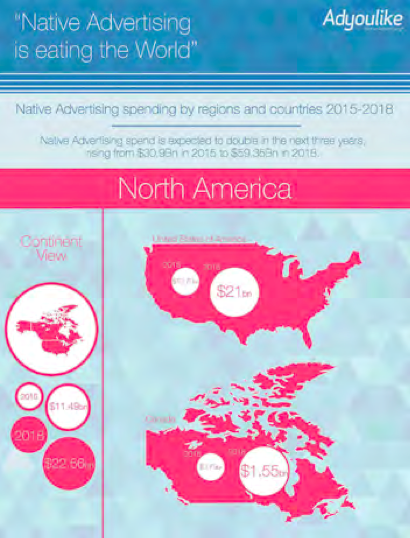 At the level of the NYT T Brand Studio, the rates for a native ad campaign run between US$250,000 and US$500,000. With all this success and all those glittering statistics and CPMs, how can it possibly be that 2016 is a make-it-or-break-it year?

How? The same greed and disregard for our ultimate customers — our readers — that led to abusive, annoying, intrusive, loud banner ads that led to ad blocking could kill native advertising.

If enough greedy advertisers and publishers take enough shortcuts and produce native advertising that is nothing more than a hard sell, readers will not only quickly tune out native ads, they will also get their revenge for being fooled by telling their social networks about their bad experience.

They will not only never click on another native ad, but they might not even come back to the offending publisher’s site and they will drive their friends away as well. Lose readers’ trust, destroy readers’ willingness to click on a native ad, and suddenly native advertising becomes nearly as irrelevant as display advertising.

Now is a very good time for publishers, advertisers, agencies, and brands to remind themselves of the cardinal rules of customer relations (and very real consequences for breaking those rules). The internet and social media have empowered consumers to take their tales of great and poor online experiences global.

As a result, one bad experience can literally circle the globe in seconds and return to torch a publisher’s site almost before the publisher wakes up to what’s happening. 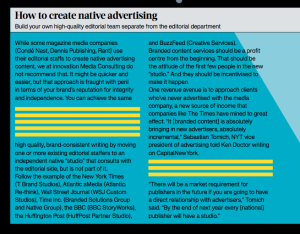 So, before a publisher or ad director (or editor if he or she is involved) agrees to running a native ad campaign that is a thinly disguised sales pitch that adds absolutely no value for the reader, they should consider the following customer relations rules offered by UK-based software company JitBit:

Soliciting advice from native advertising practitioners at agencies and publishing companies, the NAI laid out the following clear-cut guidelines:

“2016 will be a watershed year for native advertising, the coming of age year when native becomes either respectable or is dismissed as thinly veiled advertising,” wrote Tim Cain, owner at Digital First Media, in the NAI book. “Delivered effectively, good content well executed and targeted and with full transparency will confirm native as a bona fide communications medium for commercial messaging, but masquerading as organic editorial content will have the opposite and negative effect, when consumers realise there is a commercial purpose.

“Brands beware! If you have the credibility, authority and relevance consumers will accept and engage with your content, but they need to clearly recognise that it is your content, through signposting. Remember, we are all consumers and no- one likes to be misled,” concluded Cain. 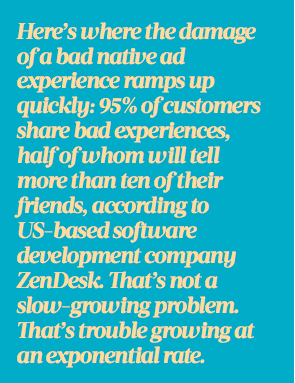 So what are the advertisers and publishers then to do with native?

“Native content, then, can’t just consist of words on a page. It needs to measure up to the standard of any great advertising creative — to be engaging, compelling, captivating, memorable, provocative,” Sam Rose, vice president of marketing at The Atlantic wrote in the NAI paper. “A poorly written, forgettable article that looks like everything else on a site but is simply — how can I put this charitably? — worse, won’t accomplish much more than frustrating the user.”

“By naturally integrating relevant content into our online experiences, native ads can significantly increase the engagement and effectiveness of a brand campaign,” wrote Russell Oakley, head of business development at The Moment, an international content company based in London. “If done badly it can infuriate the reader or viewer, jarring their experience and leave a terrible taste in the mouth.”

“There are a few fundamentals you need to do to succeed in native advertising,” wrote Leanne Brinkies, head of native advertising at King Content’s Melbourne office. “Your brand needs to tell a great story – one that the audience is interested in reading and hopefully sharing; the content should be authentic and share your brand’s expertise; it needs to be relevant — there must be a logical connection between the content, the audience and the brand; be transparent — you must disclose that the content comes from your brand; and lastly, you need to work with the right partners — these partners must provide access to the right audience in a relevant, credible and respected environment.”

“You succeed with native in the same way you succeed with any other form of advertising — or content creation, for that matter. You succeed with ambition and guts and creativity and excellence and love and care and passion and purpose. You succeed by creating things that matter, that people care about, that make them think or laugh or cry or cheer or snarl. In another post, we can talk about scale and distribution and design and shareability and anything else technical or strategic in nature,” wrote Sam Rosen, vice president of marketing for The Atlantic. “But really, when it comes down to it, successful native — to me, at least — has to do with the same qualities that make any ad, or novel, or song, or work of art unforgettable: grit, work, blood, sweat, tears, and a certain je ne sais quoi. And for better or worse, there’s no formula for that.” 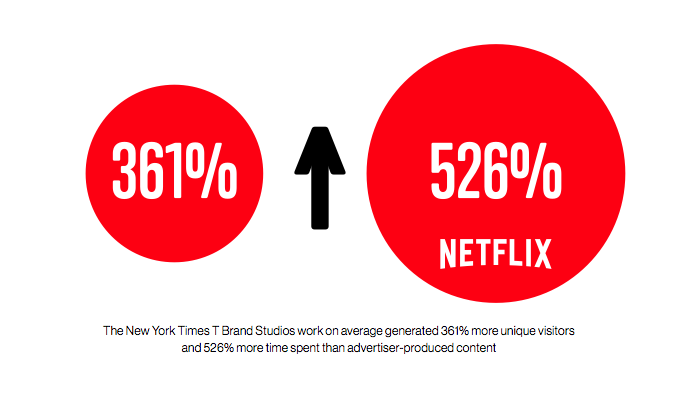 “The reason for the popularity of the medium is down to a number of factors. Firstly, the decline and ‘banner blindness’ of banner display advertising; secondly, the growth in social media and content marketing – where consumers consume brand content in the feed; and thirdly, the explosive growth in mobile advertising.

“All of these three factors are interlinked and combined in native advertising growth,” wrote Lovell. “Native advertising is also the future of all digital advertising – where content and creativity are at the heart of the brand message, rather than a single ‘look at this’ disruptive message. All future digital campaigns will need to involve content at some stage for engagement and success.” 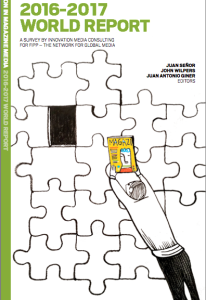 This article is one of many chapters published in our book, Innovations in Magazine Media 2016 World Report.