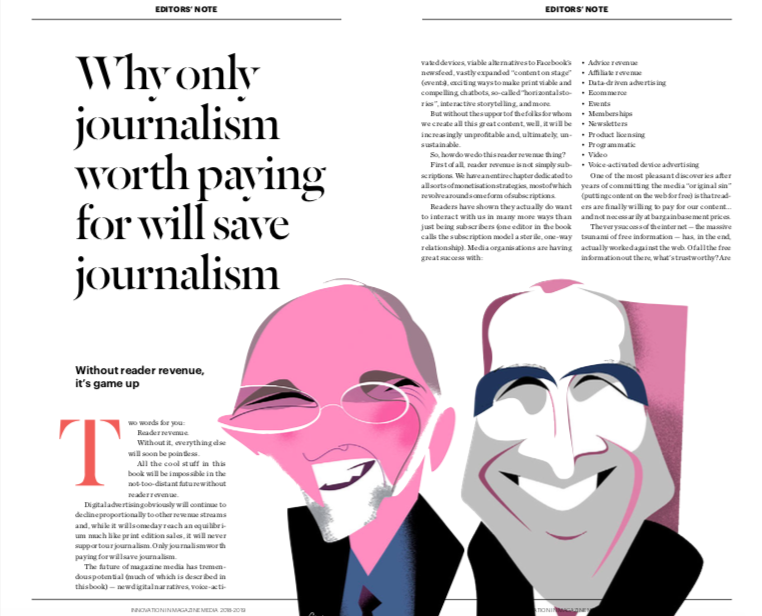 10 Sep Why only journalism worth paying for will save journalism

Without reader revenue, it’s game up

Two words for you: Reader revenue.

Without it, everything else will soon be pointless.

All the cool stuff in this book will be impossible in the not-too-distant future without reader revenue.

Digital advertising obviously will continue to decline proportionally to other revenue streams and, while it will someday reach an equilibrium much like print edition sales, it will never support our journalism. Only journalism worth paying for will save journalism.

But without the support of the folks for whom we create all this great content, well, it will be increasingly unprofitable and, ultimately, unsustainable.

So, how do we do this reader revenue thing?

First of all, reader revenue is not simply subscriptions. We have an entire chapter dedicated to all sorts of monetisation strategies, most of which revolve around some form of subscriptions.

Readers have shown they actually do want to interact with us in many more ways than just being subscribers (one editor in the book calls the subscription model a sterile, one-way relationship). Media organisations are having great success with:
– Advice revenue
– Affiliate revenue
– Data-driven advertising
– Ecommerce
– Events
– Memberships
– Newsletters
– Product licensing
– Programmatic
– Video
– Voice-activated device advertising

One of the most pleasant discoveries after years of committing the media “original sin” (putting content on the web for free) is that readers are finally willing to pay for our content… and not necessarily at bargain basement prices.

The very success of the internet — the massive tsunami of free information — has, in the end, actually worked against the web. Of all the free information out there, what’s trustworthy? Are the authors really experts, or are they poseurs? What is fake news? What is real? Why must I suffer through those damn pop-up ads interrupting my reading?

For example, as a trusted filter on world affairs, The Economist “distils the news in a ‘finish -able package’ — an antidote to information overload. You can read The Economist to the end but you cannot read to the end of the internet,” Economist Chief Marketing Officer and MD/ Circulation Michael Brunt told us.

The Economist is a premium product that costs three to four times more than other similar publications but readers are happy to pay for it. “We produce quality and our readers find our journalism valuable and are willing to pay for it.
“We are reassuringly expensive,” Blunt said.

Can you imagine a media executive saying such a thing ten or even just five years ago?
But now, the up and coming generation of current and future readers (the millennials) and many others are proving that they are willing to pay.

“The beauty of millennials is that they are very comfortable buying anything online and using their credit or debit card,” Meredith Executive Chairman Steve Lacy told the Wall Street Journal. “Our interface with them is the credit card and auto renewal. It has to be the right con- tent, and it has to be served to them the way they want it. But they’ll pay for it.

“We get the cash and run the business on consumer operating capital,” Lacy said. “We’ve always worked hard to sell one-, two- and three- year subscriptions. The renewal rate and the ability to [charge a little more over the years] is as solid as a rock.”

Those are welcome words indeed from media executives running two of the most successful media companies in the world.

The secrets to their success and the successes of so many other media companies globally are contained in the pages that follow, but until and unless you focus on migrating from ad revenue to reader revenue, it’s game over.