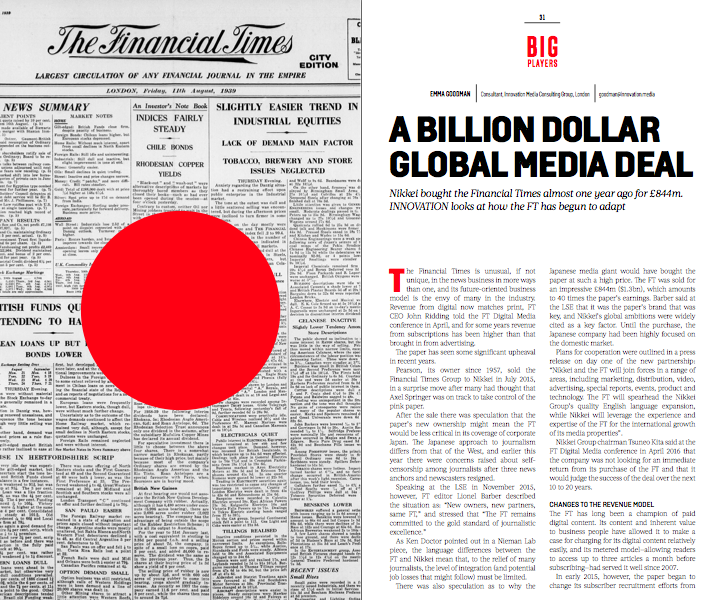 Nikkei bought the Financial Times almost one year ago for £844m. INNOVATION looks at how the FT has begun to adapt.

The Financial Times is unusual, if not unique, in the news business in more ways than one, and its future-oriented business model is the envy of many in the industry. Revenue from digital now matches print, FT CEO John Ridding told the FT Digital Media conference in April, and for some years revenue from subscriptions has been higher than that brought in from advertising.

The paper has seen some significant upheaval in recent years.

Pearson, its owner since 1957, sold the Financial Times Group to Nikkei in July 2015, in a surprise move after many had thought that Axel Springer was on track to take control of the pink paper.

After the sale there was speculation that the paper’s new ownership might mean the FT would be less critical in its coverage of corporate Japan. The Japanese approach to journalism differs from that of the West, and earlier this year there were concerns raised about self- censorship among journalists after three news anchors and newscasters resigned.

Speaking at the LSE in November 2015, however, FT editor Lionel Barber described the situation as: “New owners, new partners, same FT,” and stressed that “The FT remains committed to the gold standard of journalistic excellence.”

As Ken Doctor pointed out in a Nieman Lab piece, the language differences between the FT and Nikkei mean that, to the relief of many journalists, the level of integration (and potential job losses that might follow) must be limited.

There was also speculation as to why the Japanese media giant would have bought the paper at such a high price. The FT was sold for an impressive £844m ($1.3bn), which amounts to 40 times the paper’s earnings. Barber said at the LSE that it was the paper’s brand that was key, and Nikkei’s global ambitions were widely cited as a key factor. Until the purchase, the Japanese company had been highly focused on the domestic market.

Plans for cooperation were outlined in a press release on day one of the new partnership: “Nikkei and the FT will join forces in a range of areas, including marketing, distribution, video, advertising, special reports, events, product and technology. The FT will spearhead the Nikkei Group’s quality English language expansion, while Nikkei will leverage the experience and expertise of the FT for the international growth of its media properties”.

Nikkei Group chairman Tsuneo Kita said at the FT Digital Media conference in April 2016 that the company was not looking for an immediate return from its purchase of the FT and that it would judge the success of the deal over the next 10 to 20 years.

Changes to the revenue model

The FT has long been a champion of paid digital content. Its content and inherent value to business people have allowed it to make a case for charging for its digital content relatively easily, and its metered model—allowing readers to access up to three articles a month before subscribing—had served it well since 2007.

In early 2015, however, the paper began to change its subscriber recruitment efforts from
the metered model to one which requires readers to start a paid trial to access any content, at £1 for the first four weeks (either print or digital).

“The theory is that within that they can build a habit, and then become a subscriber”, CEO John Ridding told the Guardian. The paper continues, however, to make certain stories available to read free via social media, which helps potential new readers to discover its content.

This new model of paid trials “underpinned a strong increase in content revenues and digital subscriptions,” the paper’s statement on its 2015 results claimed.

The paper also benefits from corporate subscriptions: the FT has corporate licenses with more than 5,000 organisations, including more than 200 business schools around the world. These are all direct licenses, rather than through aggregators, which is a significant factor in increasing profits, the FT’s managing director of B2B, Caspar de Bono, said in a 2015 interview with Capgemini.

However, as Politico reported in April 2016, the FT is not immune to the challenges facing the industry, citing an internal memo from managing editor James Lamont that warned of “daunting trading conditions,” and listed areas of cutbacks. These included delays in filling job vacancies and reducing the number of casual staff, as well as further streamlining production of the print edition. 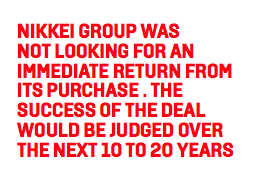 Changes in the newsroom

FT journalists now think and act digital first and the paper’s journalism is now ‘text-plus,’ Barber explained to the audience at the LSE. In practice, this means imagining stories in digital form, and
going beyond words to include graphics and images that are “tailored for the age of social media.”

1. Moving from a news factory producing multiple editions through the night to a news broadcaster with online schedules tailored to reader demand early in the morning, lunchtime and evening around the world;

2. Shifting resources from night to day and streamlining newspaper production, bringing forward print deadlines and adopting a single international edition for Asia, Europe, the Middle East and US;

3. Separating the editing and production of the newspaper from the news desks, under the guidance of a new newspaper editor;

4. Centralising the news desk structure and overall commissioning, creating the new role of story producer to develop the digital form of stories;

Data should be important to any newsroom but it is a particularly crucial part of a subscriber-focused business, where almost all readers are signed in to their accounts all the time, allowing for a more detailed analysis of reading habits.

The paper launched a new newsroom analytics tool called Lantern in March 2016 that aims to “give a much more holistic picture of what is in fact a successful story,” audience engagement editor Renée Kaplan told Nieman Lab at the time. It aims to shift attention to reader engagement rather than visits or page views, looking at time spent on page, the extent to which readers scroll, whether or not they stay on the site, and more.

“The massive change is that the strategy that has been driving the commercial side of the business needs now to inform to some extent what we are doing in the newsroom,” Kaplan said at the International Journalism Festival in Perugia in April 2016. The long term impact of the Nikkei deal remains to be seen but, in the meantime, and despite its relative financial success, the paper must continue to adapt to the ever-changing digital landscape and tackle new challenges. As more news organisations consider digital subscription models, they would be wise to learn from the FT’s focus on building stories beyond text, and generating data beyond page views.

INNOVATION’S TAKE:
Big global mergers or takeovers can be complex, un- predictable beasts but, so far, the FT seems to be benefiting from its Nikkei buyout. We could all learn from their improved focus on and experimentation with reader habits and subscriptions.