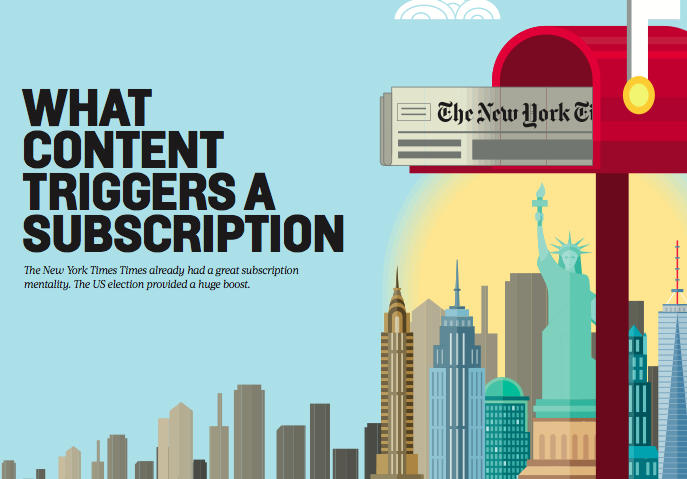 The New York Times Times already had a great subscription mentality. The US election provided a huge boost.

On a rainy Saturday in March, the New York Times held its traditional SXSW event in Austin, Texas. At the Belmont, one of the most emblematic buildings on 6th Street, The Times managed to attract—despite the bad weather—hundreds of people interested in listening to some of the paper’s journalists and managers. One of the sessions, titled “The Future of The New York Times”, was attended by the editor, Dean Baquet, and Chief Revenue Officer Meredith Kopit Levien.

They spoke at ease and at length about the past, present and future of the paper’s business. Levien explained one of the key ideas that inspires the whole New York Times team: not only that “today we are a world class news brand” but also that “we have an opportunity to be also a world class consumer brand”. Such ideas have never really been a part of the newspaper world, but the future of The Times is linked to it, and that has consequences.

An essential element of this concept is subscriptions. The Times launched digital subscriptions in 2011 and since then has added tens of thousands of new subscribers each quarter.

After decades as an ad-based business, in 2012 the combined income generated by print and digital subscriptions, along with sales of the print edition, was greater than print and web ad revenues. In the middle of 2015, the company broke the one million subscriber barrier. In 2016, subscriptions skyrocketed thanks to “the Trump effect” and the president-elect’s ferocious attacks on “the failing @nytimes”. In the second half of the year, 292,000 subscribers joined, compared to 184,000 for the whole of 2015.

By the end of 2016, The Times had a million or so print subscribers, 1.6 million digital subscribers and another 245,000 crossword subscribers. Just two months later, 2.85 million total subscribers had become 3 million.

Levien said in Austin that such a state of affairs is a very optimistic place to be: “It took us four years to get to our first million paying digital subscribers; it will take us half that time, maybe less than half that time to get the next million, and we are now running the largest paid model for journalism in the digital world”. CEO Mark Thompson said at the end of 2016 that the paper hopes to reach 10 million subscribers over the next few years. That means thinking differently about how to reach new audiences, create value and measure what’s happening.

In the beginning, the strategy was to launch dozens of subscription offers at different times of the year, or targeted at different groups. More recently, the vision of how best to go about that has changed. In February 2017, The Times launched two new ideas: a joint subscription programme with Spotify: $120/year for an All Access pass to paper as well as Spotify Premium, and a subscription sponsorship programme which now allows 1.3 million students to read for free, thanks to donations from 15,500 people. One anonymous donor gave $1 million.

In terms of content, a subscription business means orienting the product more towards users than advertisers. Products beyond journalism, which enrich the lives of users, must be added to the overall mix. The Times launched Cooking, full of recipes, Well, about health and well being, and Watching, about TV, series and films.

“Journalism that stands apart”, the paper’s new strategic report, talks about how to measure it all. The internal data group is working on something a bit more sophisticated than page views. “The data and audience insights group is in the latter stages of creating a more sophisticated metric than page views, one that tries to measure an article’s value to attracting and retaining subscribers. This metric seems a promising alternative to page views.”

“To repeat”, said the report: “The Times is a subscription-first business; it is not trying to maximize pageviews. The most successful and valuable stories are often not those that receive the largest number of pageviews, despite widespread newsroom assumptions”.

If they fail, The Times will have to cut its costs to try to balance the cheque book. 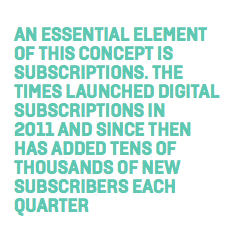 To get there, they are hunting for subscribers outside of the United States. At the end of 2016, foreign subscribers were just 13% of the total, and now they are investing $50 million over three years to increase their presence in other markets like Australia and Canada, or the Spanish-speaking market with The New York Time en Español.

The Times is a clear example of how much readers value trustworthy, quality information when there are important news stories to follow. Donald Trump is one example. When your business depends on your readers, as Baquet said in Austin, you can’t build a bad product.

“The only way the NYT can make it and be great“ is if “we are way, way better than everybody else.”
Asked if Trump had helped them in 2016, Baquet replied: “He has, without a doubt, he has”. Covering the Trump presidency has become “really exhilarating”.

The transformation of The Times’ business model over the past few years is a mirror in which many other outlets can observe themselves in. The paper has been a reference for quality. The key message is that a deep relationship with readers is the key to success.

That’s where revenue is already coming from.