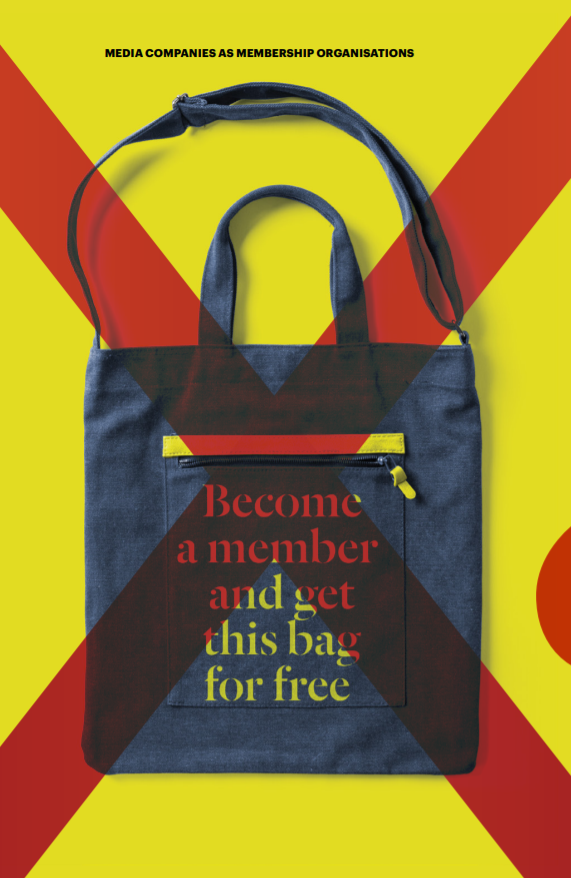 Memberships are not just a substantial revenue source, they also serve to cement and grow your relationship with your reader.

Being a “member” of something implies being in a relationship. Where’s the relationship in acquiring a tote bag?

“I came into work one morning recently and was bombarded… with links to another journalism site launching a membership programme. This programme (which shall remain nameless) offered a newsletter, early access to the publication, and that trope of all memberships: a tote bag,” said Kate Myers, Executive Director/ Revenue and Operations at First Look Media, a US-based journalism organisation, writing for the media advocacy site Poynter Institute.

“When I read the membership pitch, I was looking for some hint of a bigger picture, a way for the audience to more deeply connect with the mission of the publication,” Myers wrote. “Instead, it seemed like a just a chance to up-sell their subscriptions.”

“Today we’re increasingly seeing examples of media companies experimenting with forms of ‘membership lite’ or subscription offerings that are dressed up to feel more like paid clubs than true communities,” wrote Myers and her co-author, Membership Project Research Director Emily Goligoski. Both Myers and Goligoski oversee and study journalism membership models at their organisations.

Membership should invite readers in

“A subscription model requires audiences to pay money to get access to a product or service,” they wrote. “A subscription conveys a transactional relationship. A membership model invites audiences to give their time, money, connections, professional expertise, ideas, and other nonfinancial contributions to support organisations they believe in.”

For example, at the Honolulu Civil Beat, they invite their members to come to monthly coffee chats with their staff in the newsroom. “It’s a way to build trust [and] get ideas in the door,” Civil Beat’s Major Gifts Manager Mariko Chang told Myers and Goligoski. “These events have led to contributions for coverage, including the site doubling down on its coverage of secret police commission meetings and to an event series on news literacy in partnership with the state’s library system.”

Those events are now standing-room-only.

A variety of media membership models

At the tabloid New York Post, editors decided their membership programme would focus NOT on a transaction model offering exclusive content but instead offering unique experiences and interactions with Post staff.

“Loyal users want things we aren’t giving them now,” said Remy Stern, the New York Post’s Chief Digital Officer, at the 2018 Digiday Publishing Summit. “They want to meet their favourite columnist. They want to come to the office and see how the headlines are written.”

Research, reader testing, and reader interviews made it clear that the Post’s audience would not pay for content but they do have a deep and apparently unsatisfied appetite for more sports and gossip experiences. The Post audience is huge, with more than 53 million monthly uniques in August 2018, according to comScore.

Stern said the membership plans are focused on serving an extremely engaged sub-set of its audience — the roughly 500,000 people who spend upwards of 30 minutes a day on its site.

One membership benefit bouncing around the Post is the chance for members to go to a New York Yankees game with their favourite sportswriter, or get access to the Post’s archive of millions of photographs or get a print of The Post cover from the day they were born.

At the end of 2018, the Post had not settled on a price for membership. “It’s not going to become the single-biggest revenue stream, but as a publisher today, you have to be doing everything,” Stern said.

Does a free membership programme make financial sense?
If it serves to retain subscribers, it does.

“Retention with registered members is three to four times higher than subscribers that haven’t enlisted in the programme,” Yost said. “Subscription revenue accounts for about a third of Gannett’s overall revenue. A percentage-point improvement in retention is huge — for us, that’s big money.”

Offering a community of commenters

If being a member of an organisation involves two-way communication (and it should). then the US-based Daily Beast may be onto something with one of their membership benefits.

The Beast Inside membership programme, at $100 a year, offers a lot of perks that smack of a transaction (exclusive content, early access to content, a newsletter, a podcast) but one perk actually sounds like a real membership value: the ability to comment on the site, even on the home page.

“We wanted to find a way to build deeper, more intimate relationships with our most loyal readers,” Heather Dietrick, CEO of the IACowned Daily Beast, told Digiday.

The Beast chose to go with the membership revenue model and keep its website content free-of-charge to enable more, rather than fewer, people to discover that content and, perhaps, become a member. Dietrick cited industry research showing that roughly two per cent of a media company’s online audience will pay for content. Dietrick says she believes the Beast’s audience is more loyal than average and sees sign-ups going beyond two per cent.

At present, Dietrick says current staff will run the membership programme but she expects to bring on dedicated staff in the future.

In some cases, where readers value the media company’s content very highly, the mixed-perk membership model of content and engagement works.

Quartz, a respected US-based business news site, launched a membership programme in late 2018, featuring both exclusive content and opportunities to interact with the site and its authors and editors.

Priced initially at US$99/year (increased to US$150/year in early 2019), the membership engagement elements include a new app that allows members to communicate with Quartz staff and big business personalities as well as to comment on stories in the app.

Membership also includes special weekly field guides on hot topics that will enable readers to be smarter in their professional lives. Members can also submit questions for Quartz reporters to use in interviews, and they can attend regular conference calls between members and Quartz writers. And in 2019, Quartz introduced events open to members only.

The field guide is an example of when exclusive content makes a membership truly valuable.

“The clearer it is that your membership solves a real problem for readers, the more you’re going to edge toward that higher price point,” said Rob Ristagno, the Founder of US-based digital consulting firm Sterling Woods Group, told Digiday. “You’ve got to make them more skilled at their job, or you’ve got to make them more successful at something they’re enthusiastic about.”

“We chose the word ‘membership’ deliberately,” said Zach Seward, Quartz’s chief product officer. “In addition to the content you get, it’s a relationship with Quartz.”
Like the Daily Beast, the membership content is created by existing staff.

“We simply ask people to give us money, and they do”

From its launch in 2014, the Philadelphia-based local news site Billy Penn wanted community engagement. Four years later, that translated into a membership programme.

“From the start, the philosophy behind Billy Penn was to be engaged with our readers, to not be talking down to people as if we’re in some ivory tower and we know things that you don’t,’” Editor Danya Henninge told New York-based digital data consulting firm Parse.ly. “We want to be on the same level with our readers. It fit right in to launch a membership programme. That’s one of our main revenue streams — or, we’re working on making it one of our main revenue streams. Instead of forcing people to buy a subscription or pay to get past a paywall, we simply ask people to give us money and they do.

“If we’re going to ask for your support, your financial support, then we’re going to care about what you say,” she said. “We really want our readers’ feedback, we want to listen to them and make sure that’s the message we’re getting across.